They started out as a military-funded research project, but they might be shipped off to the circus instead. 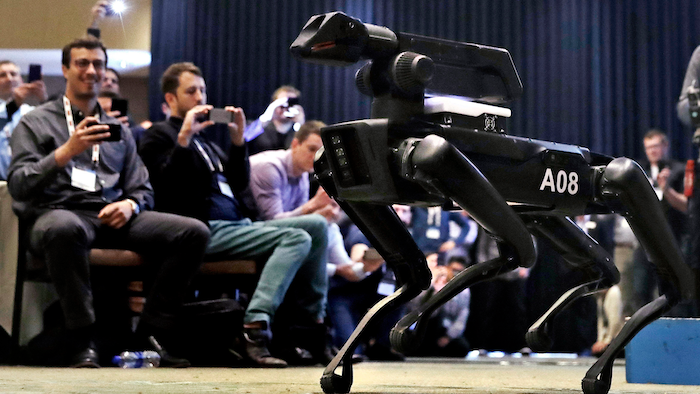 In this May 24, 2018, file photo, a Boston Dynamics SpotMini robot is walks through a conference room during a robotics summit in Boston. The Cirque du Soleil Entertainment Group says it’s in talks with robot-maker Boston Dynamics about using the four-legged Spot robot in its live shows.
AP Photo/Charles Krupa, File

BOSTON (AP) — Animal-like robots that started out as a military-funded research project might be shipped off to the circus instead of the battlefield.

Cirque du Soleil says it's in talks with robot maker Boston Dynamics about using the four-legged Spot robot in its live shows.

The agile robots walk, climb stairs and open doors. They have become famous on YouTube but haven't been applied commercially since the company was founded in 1992.

That's changing this fall. The Waltham, Massachusetts, robotics firm revealed in a YouTube post this week that Spot is now in mass production and shipping to select customers for such uses as monitoring construction sites or inspecting energy facilities.