More than 1,000 hives worth hundreds of thousands have been stolen from California orchards. 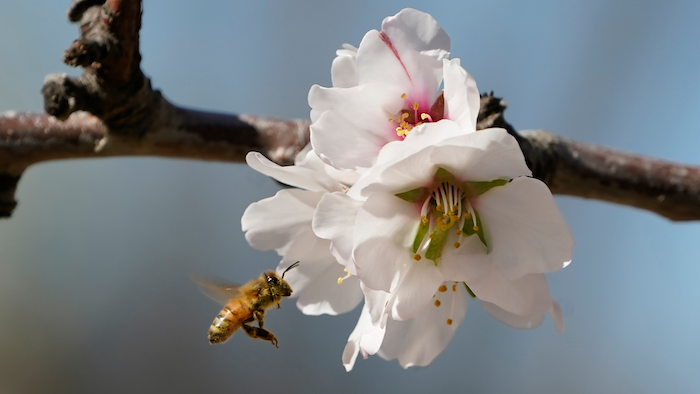 A bee approaches an almond blossom in an orchard near Woodland, Calif., Feb. 17, 2022.
AP Photo/Rich Pedroncelli

WOODLAND, Calif. (AP) — For a few frenzied weeks, beekeepers from around the United States truck billions of honeybees to California to rent them to almond growers who need the insects to pollinate the state's most valuable crop.

But as almond trees start to bloom, blanketing entire valleys in white and pink flowers, so begin beehive thefts that have become so prevalent that beekeepers are now turning to GPS tracking devices, surveillance cameras and other anti-theft technology to protect their precious colonies.

Hive thefts have been reported elsewhere in the country, most recently three hives containing about 60,000 bees taken from a grocery chain's garden in central Pennsylvania. They happen at a larger scale and uniquely in California this time of year because bees are most in demand during the largest pollination event in the world.

In the past few weeks, 1,036 beehives worth hundreds of thousands of dollars were reported stolen from orchards statewide, authorities said. The largest heist involved 384 beehives that were taken from a field in Mendocino County, prompting the state beekeepers association to offer a $10,000 reward for information leading to their recovery.

“It’s hard to articulate how it feels to care for your hives all year only to have them stolen from you,” Claire Tauzer wrote on Facebook to spread the word about the reward. A day later, an anonymous tipster led authorities to recover most of the boxes and a forklift stolen from Tauzer's family business some 55 miles (88 kilometers) away, at a rural property in Yolo County. One suspect was arrested.

Investigators also found frames, the kinds used to hold the honeycomb, belonging to Helio Medina, another beekeeper who lost 282 hives a year ago. 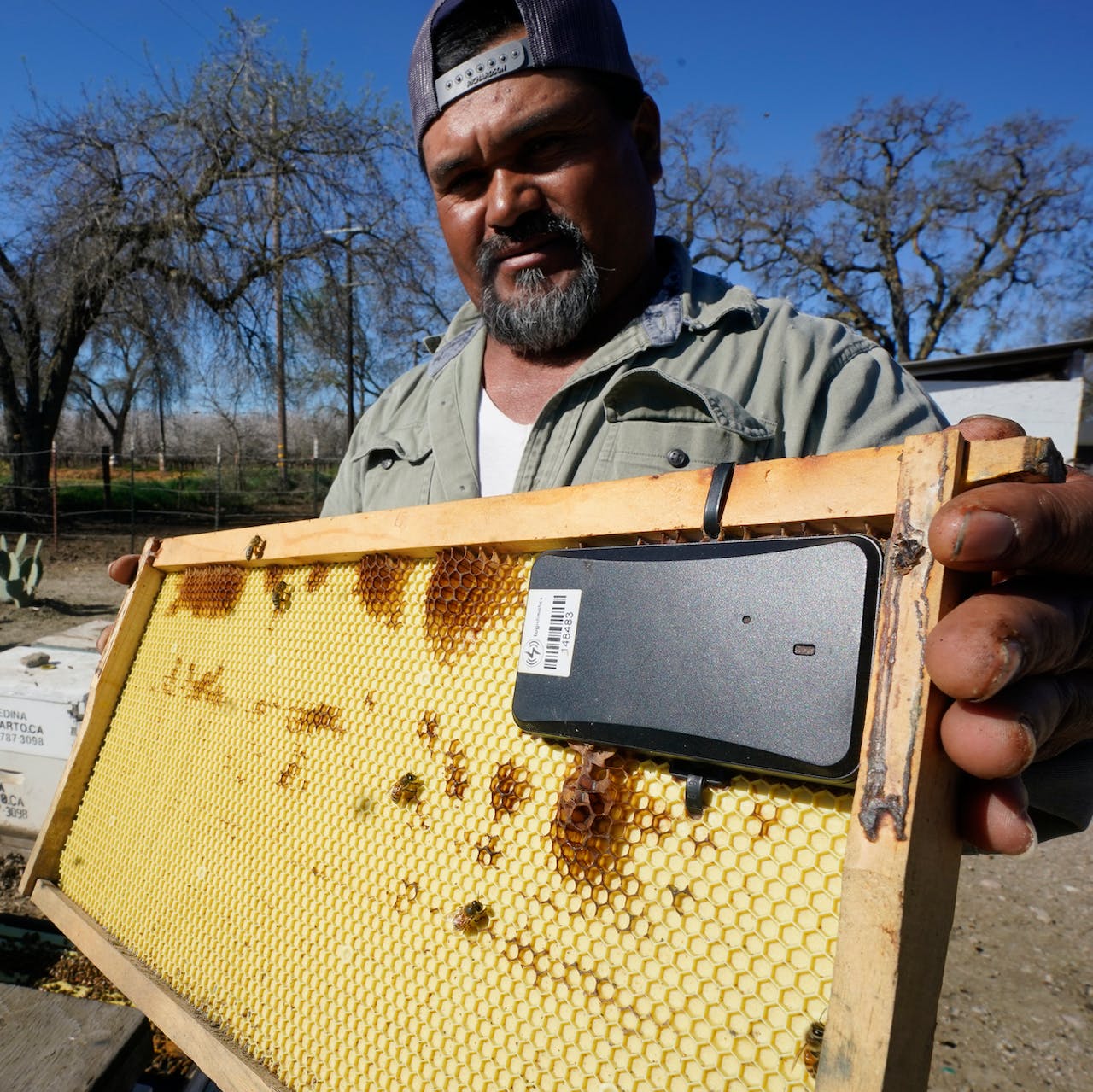 Beekeeper Hello Medina displays a beehive frame outfitted with a GPS locater, Woodland, Calif., Feb. 17, 2022.AP Photo/Rich PedroncelliMedina said the theft devastated his apiary, so this year he placed GPS trackers inside the boxes. He also strapped cable locks around them and installed cameras nearby. As the almond bloom approached and the hives became most valuable, he drove around patrolling the orchards in the dark.

“We have do what we can to protect ourselves. Nobody can help us,” Medina said.

Thefts usually happen at night, when no one is in the orchard and the bees are back in their hives. The rustler is usually a beekeeper or someone familiar with the transportation of bees.

“More often than not, they steal to make money and leave the bees to die,” said Rowdy Jay Freeman, a Butte County sheriff's detective who has been keeping track of hive thefts since 2013.

A tightening supply of bees and soaring pollination fees — jumping from less than $50 to rent a hive two decades ago to as much as $230 per hive this year — are likely motivating beekeepers to go rogue.

The demand for bees has steadily risen over the last 20 years as popularity of the healthy, crunchy nut turned California into the world's biggest almond producer. Accordingly, the amount of land used to grow almonds has more than doubled to an estimated 1.3 million acres (526,000 hectares).

Beekeepers have been keeping up with that growth by providing an ever-increasing proportion of the nation's available stock of hives. This year, a survey of commercial beekeepers estimated it will take 90% of honeybee colonies in the U.S. to pollinate all the almond orchards.

“What that means is that beekeepers are coming from as far as New York and Florida, and to get them to come all that way, pollinator fees have to rise,” said Brittney Goodrich, an agriculture economist at the University of California at Davis.

But bee populations are notoriously unstable due to a host of problems, including disease, loss of habitat and insecticides.

The drought that gripped Western states last summer also weakened colonies. The lack of rain ravaged wildflowers that provide the nectar that bees turn into honey. Beekeepers had to artificially supplement their diet with sugar solutions and pollen substitutes — and incur more costs.

For beekeepers, the loss of a hive means the loss of income from honey production and future pollination, not to mention the expense of managing the hive throughout the year. They say they hardly break even.

“For every $210 paid to rent a beehive, we put close to that much into it the whole year feeding the bees because of drought. We do all the health checks, which is labor intensive, and we pay our workers full benefits,” Tauzer said.

Denise Qualls, a pollination broker who connects beekeepers with growers, suspects the thefts are happening because beekeepers can't provide the strong colonies they promised, "so they can get the money from the grower and then they leave the hives.”

“The grower is just as responsible when they accept them," she said.

To help her clients track their investments, Qualls merged her business with tech startup Bee Hero to equip hive boxes with a GPS-enabled sensor.

Freeman, who got into beekeeping after investigating his first hive theft, said he advises beekeepers to use security cameras and put their names and phone numbers on the boxes.

He said some beekeepers have tried tagging their boxes with SmartWater CSI, a forensic tool used to help police trace recovered stolen property. The clear liquid is visible only under UV light, even through layers of paint, so police can ascertain the rightful owner even when thieves try to disguise boxes.

To raise the crime's severity, Freeman worked with prosecutors in 2016 to charge a man accused of stealing 64 beehives with theft of livestock. Under California law, theft of property worth $950 or less is classified as a misdemeanor. But the theft of any agricultural product worth at least $250 is considered a felony.

The man pleaded guilty and was sentenced to 90 days in jail and three years probation.

The California State Beekeepers' Association urges beekeepers to communicate regularly with growers about where their hives are placed, and encourages growers to hire reputable beekeepers who can show proof of ownership of their hives. The almond industry, meanwhile, is trying to reduce its dependence on bees by growing “self fertile" almond varieties that require fewer bees for pollination and by investing in research and other initiatives aimed at improving their health.

The Almond Board of California also joined a coalition of agricultural, environmental and government groups to create habitat for wild bees, butterflies and other pollinators on privately owned working lands such as cattle ranches and orchards. The state government is funding $15 million toward the effort, calling it an investment in “climate smart agriculture.”