Just like in other tech hubs, the founders, executives and employees of Berlin's technology companies are overwhelmingly white. 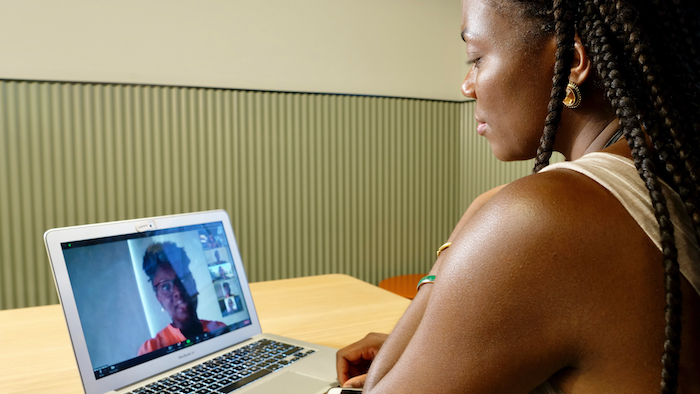 Kave Bulambo, founder of Black in Tech Berlin, speaks with other members of the tech group via video call in Berlin, Aug. 21, 2020.
AP Photo/Jona Kallgren

BERLIN (AP) — The beginning of 2019 is when Kave Bulambo really started to wonder: Where are all the Black software engineers in Berlin?

Bulambo, who grew up in South Africa and moved to Germany's capital in 2013, hires people to work at Berlin technology companies and start-ups. In time, she realized she had hired only one Black engineer.

She put out an announcement, inviting Black tech professionals to get in touch. To Bulambo's surprise, more than 600 responded in the first month. A loose-knit group, Black in Tech Berlin, was born to provide career support and networking opportunities for skilled workers underrepresented in the city's technology industry.

“We’re here. Black professionals are there in tech. And it is such a great feeling to know that,” Bulambo said, sitting in a conference room at a co-working building near Berlin's central Potsdamer Platz square.

Before the coronavirus pandemic hit Europe, Black in Tech Berlin met once a month. These days, the group holds virtual meetings online.

Berlin is considered one of Europe's main hot spots for technology companies and start-ups. Firms such as online bank N26, menstrual cycle-tracking app Clue and travel guide company Get Your Guide are headquartered in the capital.

But just like in other tech hubs, the founders, executives and employees of Berlin's technology companies are overwhelmingly white.

“And that is not only when it comes to workers and employees. It starts really from the top, when you think of investors, when you think about board members,” Bulambo said.

According to a 2019 report by London-based venture capital firm Atomico, 84% of 1,200 technology company founders polled in Europe self-identified as white and 0.9% identified themselves as Black.

The members of Black in Tech Berlin are a mix of people who were born in Germany and people who moved there from countries like Ghana, Kenya and the United States.

The group draws inspiration from similar American professional organizations but does not maintain direct contact with groups such as Blacks in Technology, which has chapters across the U.S.

The technology sector in Berlin already employs over 70,000 people, and Bulambo said she hopes that Black in Tech Berlin can be a step toward making it more inclusive.

During a recent Black in Tech Berlin virtual meeting, a participant who moved to Berlin from the U.S., Senait Isaac, said that Germany has a long way to go in considering inclusion, discrimination and racism.

Isaac said that while the tech sector tends to think it is somehow immune to racial prejudice, she has experienced episodes of discrimination in Germany that would have led to lawsuits in U.S. courts.

“There tends to be this idea that everyone is open-minded and woke and, you know, ‘we don’t see color,’ and all of this stuff. For me, it’s been quite challenging,” she said.

At the same time, Isaac believes she’s better off in Germany working to change things, especially with the current racially polarized climate in the U.S. Berlin, considered by many to be a good place to be to make a career in technology, continues to draw talented people of all races.

Ansela Manful, who moved to Berlin from Ghana, said she is always aware of her race when she is applying for positions.

“There are times I ask myself, ‘Did I not get that job because of my skin color?’ That thought still crosses my mind,” Manful said at the virtual meeting.

Black in Tech Berlin plans to launch a website to match employers with people seeking jobs. Bulambo said the contacts she made through the group enabled her to hire “many more” Black programmers since last year.

“Germany needs to do better. And Berlin needs to be better,” she said.