The U.S. has suggested the tax unfairly singles out companies like Amazon and Google. 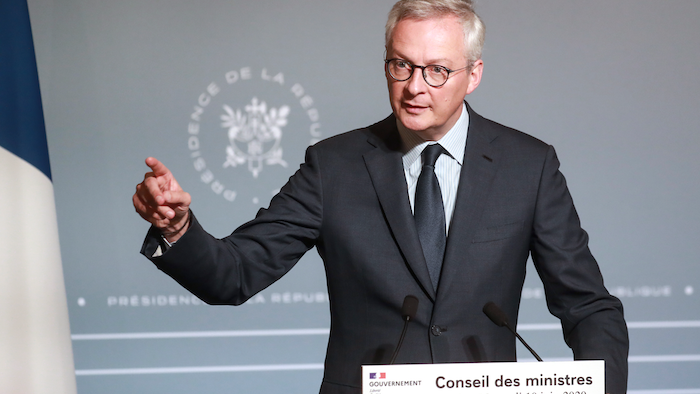 PARIS (AP) — European countries are slamming the Trump administration's withdrawal from negotiations over a major tax on big tech companies.

French Finance Minister Bruno Le Maire, speaking on France Inter, called it a “provocation” and said France will still implement the tax regardless of the U.S. change of heart.

Le Maire was referring to a letter in which U.S. Treasury Secretary Steven Mnuchin told the finance ministers of France, Spain, Italy and the United Kingdom that he was suspending talks on the tax.

“This letter is a provocation. It is a provocation against all the partners at the OECD (the Organization for Economic Co-operation and Development) when we were centimeters away from a deal on the taxation of digital giants,” Le Maire said.

In a statement, Treasury Department spokeswoman Monica Crowley said the U.S. “has suggested a pause″ in the talks as countries focus on fighting COVID-19 and reopening their economies.

The countries have been discussing an international agreement on the way global taxes work. The tech tax is meant to prevent tax avoidance measures by multinationals, but the U.S. has said it unfairly singles out companies like Amazon and Google.

U.S. Trade Representative Robert Lighthizer has dismissed the OECD efforts so far, saying the countries involved were trying to harm American companies and telling a congressional committee Wednesday “that’s not something we’re ever going to be a part of.”

“This, in turn, would trigger tax disputes and, inevitably, heightened trade tensions," said Secretary-General Angel Gurria. “A trade war, especially at this point in time, where the world economy is going through a historical downturn, would hurt the economy, jobs and confidence even further.”

“The digital tax is a necessity of the 21st century. It’s not a whim or an eccentricity,” Spanish Finance Minister María Jesús Montero told Spain’s Cadena SER radio. “This is because we have an analogue taxation system while we have a digital society and a digital economy”.

Le Maire said there was a joint response to the letter from the four countries on Thursday.

The French parliament approved the initial stages of a digital tax law last year but agreed to postpone implementation until December of this year in exchange for the U.S. holding off on retaliatory tariffs.

The U.S. has launched an investigation into the French digital tax that may lead to tariffs on French products.

Joe Kennedy, senior fellow at the Information Technology and Innovation Foundation, a non-partisan think tank, said the U.S. has a legitimate complaint about the French digital services tax violating international trade rules. But Kennedy has misgivings about the decision to suspend talks as the world economy contends with fallout from the coronavirus pandemic.

"I think the administration should stay in there,’’ he said. “It’s best to negotiate ... This is the worst time to have a ramping up of trade disputes.’’

A so-called “Google tax” is also making its way through the Spanish parliament, with an eye toward levying it later this year. The Spanish Cabinet agreed in February to go ahead with its adoption despite threats of retaliatory tariffs by the Trump administration.

Spain wants to place a 3% tax on online ads, on deals brokered on digital platforms and on sales of user data by tech companies that have a turnover of more than 750 million euros ($842 milllion) a year internationally and more than 3 million euros in Spain. It hopes to raise close to 1 billion euros a year in extra tax revenue.

Britain, which recently introduced its own digital services tax, said it would keep pushing for a global levy.

“We have always been clear that our preference is for a global solution to the tax challenges posed by digitalization, and we’ll continue to work with our international partners to achieve that objective," the Treasury department said in a statement.

The U.K.'s 2% digital tax took effect in April and applies to search engines, social media services and online marketplaces earning more than 500 million pounds ($624 million) in annual global revenue, including 25 million pounds from British users. The Treasury estimates it will eventually bring in an extra 515 million pounds a year.