Researchers hope to monitor fish farms without disrupting the environment. 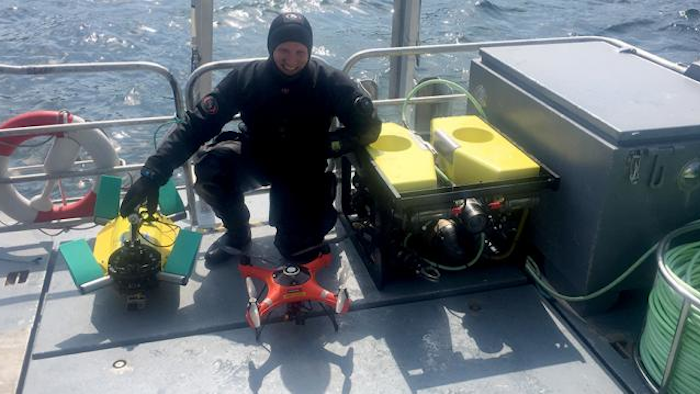 A sea cage can hold up to 200000 farmed salmon. If the cage sustains damage, such as a hole in the nets, the fish could swim out through the opening and make their escape in short order.

Clearly, the aquaculture industry wants to avoid this scenario. Not only do escapes lead to large losses for the industry, but no one wants farm-raised salmon to mix and interbreed with wild populations.

Keeping an eye on what is going on inside the cages is critical for being able to respond and repair any damage promptly.

Monitoring life in the cages is important for other reasons as well, such as ensuring good fish welfare: What is the health condition of the fish? How serious is the salmon lice problem? Do the cages need to be cleaned?

Human divers and underwater vehicles controlled by operators on land are commonly used to check the conditions in sea cages. Both types of intruders can disrupt and stress the fish.

These methods also limit the frequency of inspections.

Robotics and biology researchers have been trying to find out which monitoring methods disturb fish least. The tests that have a robotic turtle swimming around the cage to film the equipment and fish have proven to do the inspection job better and more gently.

The experiments show that the fish are only negligibly scared or stressed by the robotic turtle. They swim calmly and fairly close to the turtle, whereas they keep away from the intruders in experiments with divers and thruster-driven underwater robots.

"The overall purpose of the experiments wasn't just to test the turtle robot, but also to investigate what characteristics robots being used in the aquaculture industry should have," says Maarja Kruusmaa. She is a professor at the Norwegian University of Science and Technology's (NTNU) Department of Engineering Cybernetics and at Tallinn University of Technology.

"We've found that the most crucial characteristics of the surveillance robot are its size and speed, whereas colour and motor noise hardly matter at all," she said.

The turtle robot's small size and slow movements are the characteristics that make it less disturbing to the fish. The fact that it resembles an organism that lives in the ocean is less important.

"The conclusion turned out to be the opposite of our expectations. The fact that the robot looks like a marine animal doesn't seem to play any role at all. And that's actually good news - it means we don't have to build the robots to be fish- or turtle-like. That will make it cheaper to develop and use robots in this new field of application to monitor marine organisms," Kruusmaa says.

The research indicates which factors are important when developing robots for the fish farming industry or for monitoring fish in their natural setting.

Kruusmaa and Alfredsen are both employed by NTNU AMOS - the Centre for Autonomous Marine Operations and Systems. AMOS is developing new types of underwater vehicles and new offshore monitoring methods as their focus areas.

Robots like the robotic turtle can provide fish breeders with online updates and monitoring of life in the sea cage. The turtle can also be connected to various measuring instruments and sensors.

Using robotic technology instead of divers for surveillance allows monitoring to continue without interruption. This continuity can contribute to quicker responses, greater predictability, better fish welfare and lower mortality.

The researchers carried out the practical experiments in SINTEF Ocean's full-scale aquaculture laboratory ACE, operated by SalMar as part of the EU project AQUAEXCEL2020.

SINTEF, NTNU and Tallinn University of Technology are collaborating on this project.

The turtle robot, named U-CAT, was developed at Tallinn University of Technology in Estonia and was originally designed for underwater archaeology applications. The idea was to use it to investigate shipwrecks on the sea floor, so it was designed as a small and very manoeuvrable robot.

Alfredsen discovered that the robot could be used in aquaculture because it had precisely these properties.

The experiments in the sea cages at SalMar have shown that this robotic technology can also benefit the aquaculture industry.