Northeastern University will open the Roux Institute in Portland next spring. 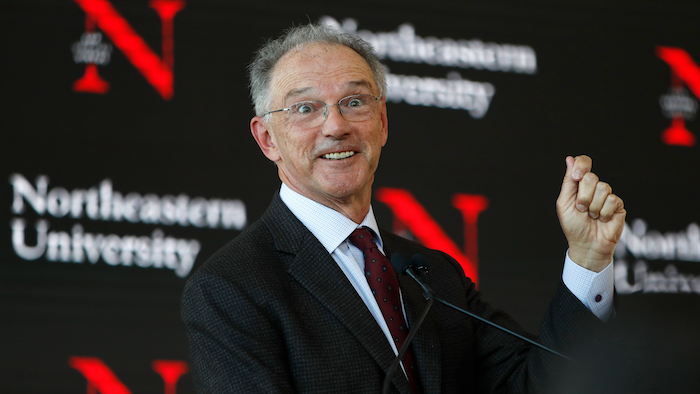 David Roux speaks at a news conference to announce his investment in Northeastern University to establish a graduate school and research center in Portland, Maine, Jan. 27, 2020.
AP Photo/Robert F. Bukaty

PORTLAND, Maine (AP) — A Maine native is donating $100 million to Northeastern University to establish a graduate school and research center in Portland in hopes of transforming the city into a technology hub and sparking economic growth, officials said Monday.

The Roux Institute, which will open in the spring, bears the name of donor David Roux, who grew up in Lewiston, Maine, and built a fortune as a technology entrepreneur and Silicon Valley investor. The goal is to give a jolt to the largest city in a rural state that lags behind the region in wages and has an aging population.

“There's no reason we shouldn't be to Boston what San Jose is to San Francisco,” Roux told a crowd of business and government leaders near Portland's waterfront Monday. “We live today in an innovation economy.”

Ten companies, including retailer L.L. Bean, disability insurer Unum, pet diagnostics company Idexx and the Jackson Laboratory, have signed on as founding partners, which will enable the center to help people adapt to the evolving economy.

Roux's efforts began a few years ago with a review of university options. His team eventually settled on Northeastern, which is known for providing its students with work and internship opportunities as part of degree programs.

The institute doesn't have a location yet, but it's expected to be situated in downtown Portland, Roux said. The graduate programs are expected to focus on digital technology and advanced life sciences.

The facility will add Portland to a network that includes its main campus in Boston and satellites in several other cities in the U.S. and Canada. The project's leaders are hoping to start fast, Joseph E. Aoun, Northeastern's president, said classes in the graduate programs are expected to start this summer.

“The impact of the Roux Institute will reverberate across the region for generations to come. It will serve as a national model for expanding growth and innovation, and reducing inequality,” Aoun said.

Maine Gov. Janet Mills and Portland Mayor Kate Snyder both characterized the project as transformative for Maine and the Portland metropolitan area. Snyder called it “a game changer for our city and economic future" that would “become a talent recruitment program for the region and state” in the future.

“Maine is more than lobsters and lighthouses, although those things are important, too,” Snyder said.