The second phase, which will consider allegations that Canadian and U.S. authorities violated Meng Wanzhou's rights, is slated for June. 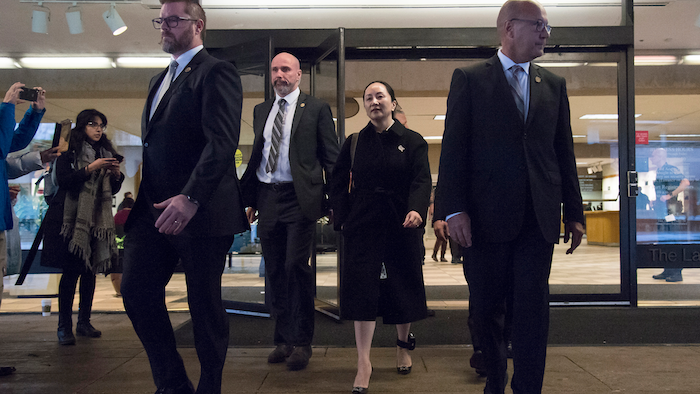 VANCOUVER, British Columbia (AP) — A Canadian judge said Thursday she will announce her decision at a later date after ending the first phase of an extradition hearing that will decide whether a top executive of Chinese tech giant Huawei is sent to the United States.

Canada arrested Huawei's chief financial officer in December 2018 at Vancouver's airport at the request of the U.S. as she was changing flights.

The U.S. Justice Department accuses Huawei of using a Hong Kong shell company to sell equipment to Iran in violation of U.S. sanctions. It says Meng, 47, committed fraud by misleading the HSBC bank about the company's business dealings in Iran.

On Wednesday, Canadian Department of Justice lawyer Robert Frater told Associate Chief Justice Heather Holmes that fraud is at the heart of the case and by lying to the bank, Meng put the bank at risk.

Frater said sanctions were the reason for the meeting with the bank, but it is the alleged misrepresentation that matters to the United States.

“The court is being embarrassed," Fenton said. “There can be no fraud here because all risk to HSBC is based on underlining US sanctions risk which cannot exist in Canada."

Homes said she would reserve her decision.

If the judge rules that what Meng is charged with is not a crime in Canada, Meng will be free to leave Canada.

Meng, who is free on bail and living in one of the two Vancouver mansions she owns, waved to the public on the way in the courtroom.

The second phase of her extradition hearing, scheduled for June, will consider defense allegations that Canada Border Services, the Royal Canadian Mounted Police and the FBI violated Meng's rights while collecting evidence before she was actually arrested.

Beijing views Meng's case as an attempt to contain China's rise. Huawei represents China's progress in becoming a technological power and has been a subject of U.S. security concerns for years.

Meng denies the U.S. allegations. The U.S. Department of Justice has stressed that Meng's case is separate from the wider China-U.S. trade dispute.

Huawei is the biggest global supplier of network gear for cellphone and internet companies. Washington is pressuring other countries to limit use of its technology, warning they could be opening themselves up to surveillance and theft.

China and the U.S. reached a "Phase 1" trade agreement last week, but most analysts say any meaningful resolution of the main U.S. allegation — that Beijing uses predatory tactics in its drive to supplant America's technological supremacy — could require years of contentious talks.

In apparent retaliation for Meng's arrest, China detained former Canadian diplomat Michael Kovrig and Canadian entrepreneur Michael Spavor. The two men have been denied access to lawyers and family and are being held in prison cells where the lights are kept on 24 hours a day.