The tech workers' march merged with a march by thousands of students around Seattle's City Hall. 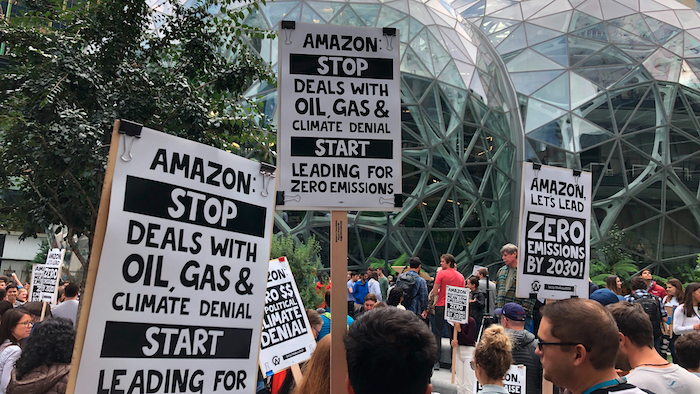 SEATTLE (AP) — As they joined a massive climate march led by Seattle school students Wednesday, hundreds of Amazon workers celebrated the company's recent vow to cut its use of fossil fuels but said there's more work to do.

"We will not take our eyes off Amazon's carbon emissions," software developer Weston Fribley told a crowd gathered outside Amazon's Spheres.

The tech workers' rally Friday was part of global climate protests. Amazon employees were joined by some workers from Google and other companies.

Amazon, which ships more than 10 billion items a year, announced Thursday that it would cut its use of fossil fuels. It said it had ordered 100,000 electric vans to deliver packages beginning in 2021, and that it plans to have 100% of its energy use come from solar panels and other renewable energy by 2030. That's up from 40% today.

Amazon said it emitted 44.4 million metric tons of carbon dioxide last year, a number that approaches the pollution rates of some small nations.

At the rally, workers booed when Fribley said the company still caters Amazon Web Services products to the oil and gas industry and still makes political contributions to politicians who deny climate change.

The employees held signs, including some made from recycled Amazon boxes, that read, "No AWS for Oil and Gas," and "Amazon Let's Lead: Zero Emissions by 2030!"

The workers gathered at the Spheres, a four-story structure that looks like three connected glass orbs. Inside the spheres, Amazon workers are able to relax in a rainforest-like conservatory.

Some expressed confidence that Amazon, which has about 50,000 workers in Seattle, will meet its climate promises.

"If Amazon cannot achieve this, I don't know which company can," said software developer Vaibhav Desai.

The tech workers' march merged with a march by thousands of students, filling streets around City Hall. On Twitter, Councilmember Mike O'Brien called it the largest crowd he'd ever seen at the building.

"This is one of the few times when people my age can actually make a difference, and adults will notice," said Michael Ronks, a 17-year-old student at Garfield High School.

Students also protested elsewhere around the state, including at the Capitol in Olympia. Gov. Jay Inslee, who recently abandoned his climate-focused presidential bid, addressed a crowd in Spokane.