Optimized for 5G networks and packing 10.3 billion transistors into its fingernail size, the Kirin 990 will be the brain powering the Mate 30 phone. 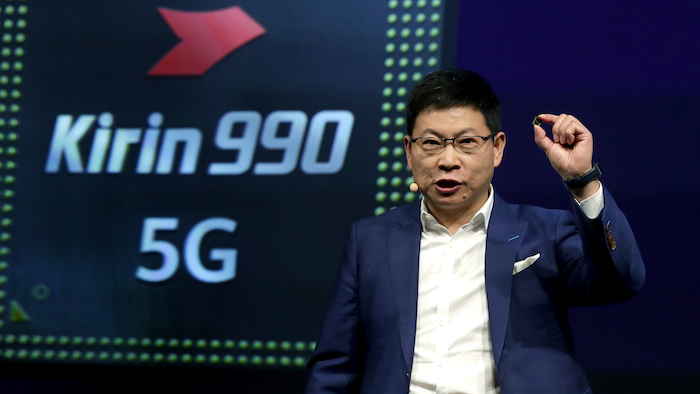 BERLIN (AP) — Chinese tech giant Huawei unveiled its latest advanced chipset Friday ahead of the upcoming launch of its latest flagship smartphone, even as uncertainty hangs over whether the device can use Google's Android.

Optimized for new 5G networks and packing 10.3 billion transistors into its fingernail size, the Kirin 990 will be the brain powering the Mate 30 phone.

Huawei, the world's No. 2 smartphone maker, plans a global launch for the phone in Munich, Germany, on Sept. 19.

But with the U.S.-China trade war raging, it's unclear whether the device can use the Android operating system. Sanctions bar U.S. companies from selling technology to Huawei without government approval, though there are 90-day exemptions for a narrow list of products and services.

Yu revealed little about the Mate 30 as he showcased the company's other products. He touted the new chip's lower energy use and superfast 5G download speed.

"This is the latest semiconductor technology," he said.

Huawei has developed its Kirin line of chips to power some of its phones and reduce reliance on U.S.-based Qualcomm Corp.'s Snapdragon and other foreign suppliers. It has also built its own operating system, Hongmeng, though executives have said they hope to be able to keep using Android.

The U.S. and China are locked in tech and economic rivalry, with Washington pressuring allies to ban Huawei, the world's biggest supplier of telecom gear, from new 5G networks.

Beijing on Friday lambasted the U.S. opposition to Huawei after Vice President Mike Pence this week called on Iceland and other governments to find alternatives.