Smart Sink Should Save Water 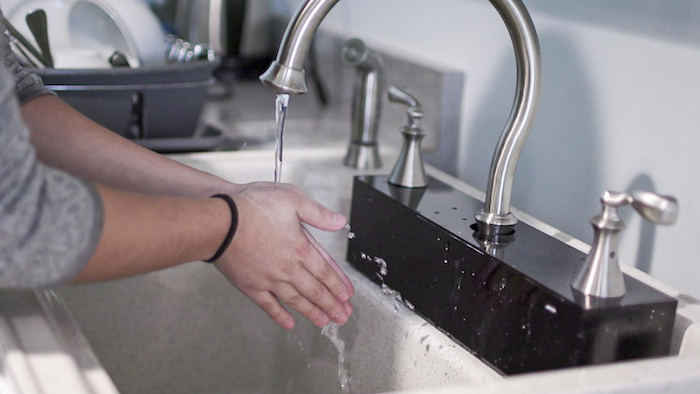 Barely hidden from his study participants, William Jou, a former graduate student in mechanical engineering at Stanford University, pulled off a ruse straight out of The Wizard of Oz. Except, instead of impersonating a great and powerful wizard, Jou pretended to be an autonomous sink. He did this to test whether a sink that adapts to personal washing styles could reduce water use.

A faucet with anything close to the brains of a mechanical engineering student doesn't yet exist. So, Jou and his colleagues in the lab of Erin MacDonald, assistant professor of mechanical engineering, made the next best thing: a faucet that seemed to automatically adjust to a user's preferences, but was actually controlled by Jou.

The results of their sly experiment, detailed in a paper presented Aug. 20 at the International Design Engineering Technical Conferences & Computers and Information in Engineering Conference, support the idea that thoughtfully designed smart sinks could help conserve water by regulating water use and nudging users to develop more water-conscious habits.

"We looked at the faucet because that's where a lot of water usage in the home occurs, but when you compare your sink to other products in the house - a thermostat or refrigerator - you see that there haven't been updates to how the sink works in a very long time," said MacDonald, who is senior author of the paper. "There have been small updates but nothing that really harnesses the power of technology."

Participants in this experiment had to wash dishes three times, with Jou secretly controlling the temperature and flow of the sink during the second washing only. With Jou involved, participants used about 26 percent less water compared to their first washing. In the third round, they still used 10 percent less water compared to the first round, even though the sink was back to being brainless. This shift in water use happened without participants knowing the experiment was about water conservation.

"Water conservation is particularly relevant given our location in California," said Samantha Beaulieu, a graduate student and co-author of the paper. "We also wanted to see if people's habits were adjustable; if interacting with this faucet could then change how people interact with a manual faucet. The results we found seem to indicate that's possible."

Pay No Attention to the Grad Student

In order to create a situation where people would trust - and hopefully enjoy - a sink that makes water decisions for them, Jou closely monitored the participants' washing styles during their first round of cleaning so he could emulate them in the second round.

"As the algorithm, I'm trying to use that information to leverage their cognitive style or user behavior style to see if I can help them use less water while still keeping them happy," described Jou, who is lead author of the paper. "Whereas a lot of products today are made for general use, this is a product that's learning about you and adapting to what your style is."

In surveys after the experiment, 96 percent of participants who interacted with the smart sink (there was a control group that washed dishes three times without Jou) said they thought there was potential for smart faucets to save water. Many of them even expressed interest in buying such a product.

"Most people were pretty amazed by the sink," said Beaulieu. "A lot of people left the experiment asking what the algorithm was or asking how it worked or how to see more. We basically told them we'd have to wait until the end of the experiment to answer those questions."

While the results from and reaction to washing with Jou's assistance were impressive, the researchers were particularly heartened by how such a brief interaction with the "autonomous" function changed participants' water use.

"We didn't even plan on having that third step until very late in the research, when we were pilot testing," said MacDonald. "I never would have thought that having just one experience with 'William the Algorithm' people would retain the training and wash their dishes differently."

The Sink of the Future

The researchers imagine a future where hospital sinks encourage employees to wash their hands properly and our personal sink and shower preferences can be transferred to hotels and friends' houses. Schools and neighborhoods could organize competitions to save water and raise water conservation awareness. Through additional features, the sink could even detect leaks.

That being said, creating this one sink required years of work and didn't even include an algorithm. In addition to implanting artificial intelligence, making a version for mass production that's actually autonomous would require sensors that could differentiate between users and between scenarios - such as washing a pot versus a fork versus hands. Still, the researchers are optimistic that studies like these could lay the groundwork to support those developments.

"We're all human beings - we have good days and bad days. A product like this could have a large impact because it's growing and learning with you as you change," said Jou. "This faucet is working toward saving water but it's also keeping its user happy. In the long term, products like this might be our future."