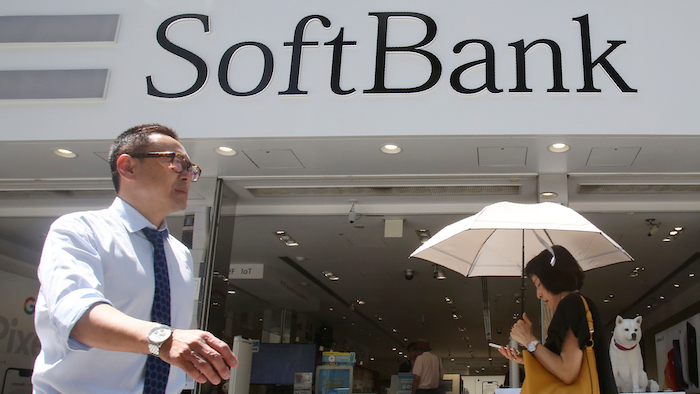 Dragging on earnings was U.S. mobile operator Sprint. But SoftBank said Sprint will merge with T-Mobile and will no longer be its subsidiary. The U.S. Department of Justice approved the merger with conditions last month.

"It is still not in the final stages of a deal, and there may still be problems, but it was a big step forward," SoftBank Chief Executive Masayoshi Son told reporters.

SoftBank also has stakes in Arm of Britain and Chinese e-commerce giant Alibaba Group, and its subsidiary owns Yahoo Japan. It has developed the talking companion robot Pepper, was the first to offer the iPhone in Japan and is a leader in the solar energy business.

Other investors have signed on, including Apple, FoxConn Technology Group, Microsoft Corp. and Japanese banks and other companies. Son said the total investment may grow because talks were ongoing with other investors.

The first Vision Fund, now totaling $97 billion, came under scrutiny after the killing of Saudi journalist Jamal Khashoggi. Much of the funding for that investment entity came from Saudi Arabia.

SoftBank promised to diversify its funding sources. Vision Fund 2 does not include any Saudi money.

Son said the investment focus was on what are called "unicorns," which are defined as technology startups with at least $1 billion market value. But he has decided to target innovators in artificial intelligence.

Recently, SoftBank and Southeast Asian ride-hailing app Grab said they were investing $2 billion in Indonesia over the next five years.

SoftBank does not give earnings forecasts.