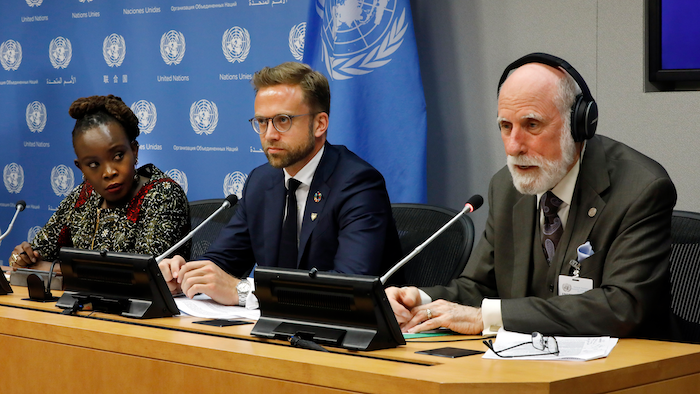 An independent U.N. panel called Monday for much greater cooperation to bring digital technology to roughly half the world's people, and a senior Google executive said mobile phones with internet access are being created to sell for about $20 that can help make this possible.

Google Vice President Vinton Cerf said at a news conference after the panel's report was officially launched that "it's going to cost a lot of money" to end the digital divide.

But without driving down costs of phones and communications, he said, "we won't succeed in getting the other 4.5 billion, or 3.5 billion, people online."

Nonetheless, Cerf was optimistic. "I think that we're going to see the investment made primarily out of pure, simple incentive on the business side and demand on the consumer side," he said.

Cerf is one of 20 members of the panel established by Secretary-General Antonio Guterres in July 2018 to advance a global dialogue on how the world can work better together to realize the potential of digital technologies to advance the well-being of all people while mitigating their risks.

It is led by Melinda Gates, co-chair of the Bill & Melinda Gates Foundation, and by Jack Ma, executive chairman of China's Alibaba Group.

"We are living at the dawn of a new digital era," Ma said in a statement. "Global cooperation among all parties — private sector, government, citizens, academics and civil society — is needed to use technology to achieve more prosperity, more opportunity, and more trust for people around the world."

Cerf, who is also Google's "chief internet evangelist," said the most significant places without access to digital technology are in rural areas, not only in countries in Africa but in the United States, where perhaps 10% to 15% of the population doesn't have reliable internet access.

In addition to costs, he said, having internet applications that are useful is also a problem. It's not helpful if on the web "you can discover a plumber in New York but you happen to be in Bogota," and you can't find much in the language you speak, Cerf said.

"Digital technology is no longer a luxury," he said. "It is essential for development, also for a developed country like Norway."

Whatever the cost, Astrup said, it will be overshadowed by the benefits of improving people's lives, solving some major global challenges and using big data, for example, to predict and prevent famine.

But Gates said in a statement that "digital technologies can help the world's poorest people transform their lives, but only if we are willing to address the inequalities that already keep them from fully participating in the economic and social lives of their countries."

The report recommends that every adult in the world have affordable access to digital networks and digital financial and health services by 2030.

But the panel also cautioned that growing opportunities from digital technologies "are paralleled by stark abuses and unintended consequences." It noted the serious problem of harmful content on social media and challenges to privacy, and it called for more effective action to prevent the erosion of trust by the proliferation of irresponsible uses of cyber capabilities.

The panel also urged Guterres to conduct a global review of how human rights apply to digital technologies.

Panel member Nanjira Sambuli of Kenya, who is a senior policy manager at the World Wide Web Foundation, said a key recommendation is that technology companies "shouldn't only consult on the human rights element as an afterthought."

"They have to start figuring out among themselves the proactive steps to engage at every step of the way on the human rights implications," she said.