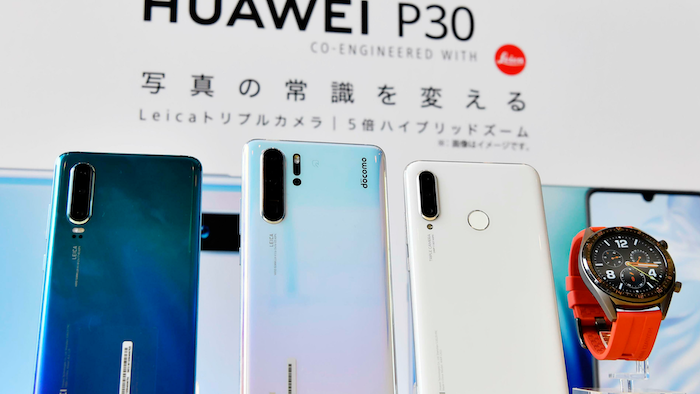 In this May 21, 2019, photo, Huwaei's new products are on display during a news conference in Tokyo.
Ren Onuma/Kyodo News via AP

British and Japanese mobile phone companies said Wednesday they're putting on hold plans to sell new devices from Huawei, in the latest fallout from U.S. tech restrictions aimed at the Chinese company.

Britain's EE and Vodafone and Japan's KDDI and Y! Mobile said they are pausing the launch of Huawei smartphones, including some that can be used on next generation mobile networks, amid uncertainty about devices from the world's No. 2 smartphone maker.

The U.S. government last week restricted technology sales to Chinese telecom gear suppliers because of alleged security risks, though telecom carriers got a 90-day grace period to let them find other suppliers. The sales ban is part of a broader trade war between Washington and Beijing.

British mobile chip designer Arm said separately it was complying with the U.S. rules, after the BBC reported it was suspending business with Huawei — a move that could hobble the Chinese tech company's ability to produce chips for new devices.

Vodafone said in a statement that it's "pausing pre-orders" for the Mate 20X, Huawei's first phone for 5G networks, as "a temporary measure while uncertainty exists regarding new Huawei 5G devices."

EE CEO Marc Allera said sales would not resume until it gets "the information and confidence and the long-term security" that customers will be supported over the device's lifetime. The company was also set to sell the Mate 20X followed by Huawei's Mate X folding handset.

EE said it's working with Huawei and Google, which makes the Android mobile operating systems to make sure it "can carry out the right level of testing and quality assurance."

The Trump administration's order last week cuts Huawei's access to American chips and Google, which makes the Android operating system and services for its smartphones.

Y! Mobile, owned by Japanese technology company Softbank, said sales of the Huawei P30 lite, set for May 24, have been delayed, and advance orders were canceled.

It's unclear when, or if, the companies will lift the sales freezes.

British carriers plan this year to roll out 5G services while Japan will follow in 2020. Fifth generation mobile networks will enable superfast downloads and pave the way for new innovations like connected cars and remote medicine.

Arm, which is also owned by Softbank and designs mobile microprocessors that power most of the world's smartphones and tablets, said it "is complying with all of the latest regulations set forth by the U.S. government."

The company told employees to halt all business deals with Huawei, the BBC reported, citing a company memo that said its designs contained "U.S. origin technology."

In response to the report on Arm, Huawei said it recognizes that some of its partners are under pressure as a result of "politically motivated decisions" but that it's "confident this regrettable situation can be resolved."