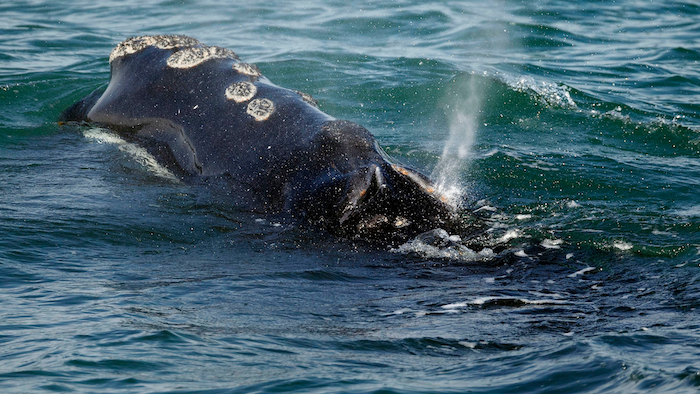 In this March 28, 2018, file photo, a North Atlantic right whale feeds on the surface of Cape Cod bay off the coast of Plymouth, Mass.
AP Photo/Michael Dwyer, File

The developer of a wind farm off Massachusetts is taking steps to protect the endangered North Atlantic right whale.

Vineyard Wind announced Tuesday it's seeking proposals for an acoustic monitoring system to detect and track the critically endangered species.

The company says the system will help ensure speed restrictions and other marine safety protections are followed. It's also expected to benefit whale researchers and mariners.

The effort stems from an agreement Vineyard Wind reached with national environmental groups to assure protection of right whales during and after construction of its 84-turbine wind farm 15 miles (24 kilometers) south of Martha's Vineyard.

The company has also committed to limiting construction work when the whales are in the region, and it has created a $3 million fund to help protect marine mammals.