The automaker and electronics giant are combining their Japanese housing businesses to help showcase connected technologies. 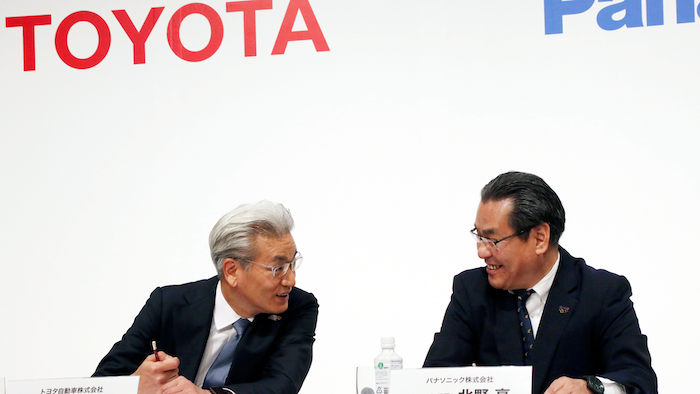 Japanese automaker Toyota and electronics giant Panasonic are forming a joint venture combining their housing businesses in Japan to showcase technologies such as connected cars and the internet of things.

Toyota Motor Corp., which offers housing as well as vehicles in Japan, said the new company will offer homes showcasing those technologies.

Panasonic Corp. said its housing subsidiary will become part of the joint venture. The companies said Thursday the deal should concluded by January 2020.

Earlier this year, Toyota and Panasonic announced a joint venture to research, manufacture and sell batteries for ecological autos, an increasingly lucrative sector amid concerns about global warming.

The companies have been studying working together on batteries since 2017.

Toyota Chief Executive Akio Toyoda said the automaker was eager to collaborate with various companies as the industry develops.

"We will put our respective strengths together to offer new value in everyday life," he said.

Toyota, which makes the Camry sedan, Prius hybrid and Lexus luxury models, has been bullish on partnerships with other automakers and with technology outfits such as ride-sharing giant Uber and Japanese technology company SoftBank Group Corp.

Toyoda has repeatedly said that to survive Toyota must do more than just sell cars, and have various net, ecological and robotics technology under its wings.