The system built by a small Alabama technology company sparked a years-long fight with the U.S. Postal Service, which says it shouldn't have been patentable. 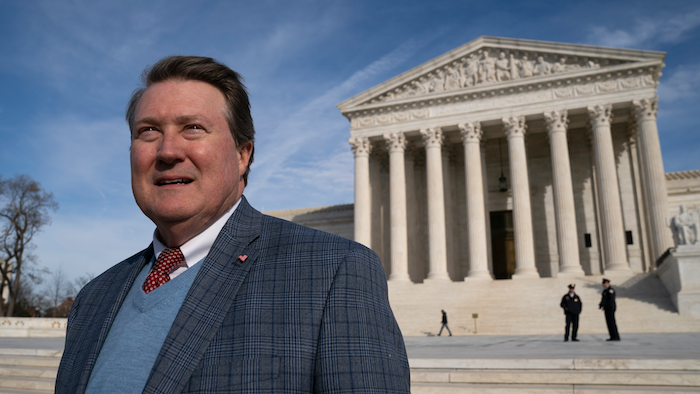 Mitch Hungerpiller of Birmingham, Ala., who invented a computerized system to automate the processing of returned mail, visits the Supreme Court in Washington, on Feb. 14, 2019.
AP Photo/J. Scott Applewhite

Mitch Hungerpiller thought he had a first-class solution for mail that gets returned as undeliverable, a common problem for businesses that send lots of letters.

But the process he helped develop and built his small Alabama technology company around has resulted in a more than decadelong fight with the U.S. Postal Service, which says his solution shouldn't have been patentable. The David vs. Goliath dispute has now arrived at the Supreme Court. On Tuesday, the justices will hear Hungerpiller's case, which involves parsing the meaning of a 2011 patent law.

"All I want is a fair shake," said Hungerpiller, who lives in Birmingham and is a father of three.

Hungerpiller, 56, started thinking seriously about returned mail in 1999 when he was doing computer consulting work. While visiting clients he kept seeing huge trays of returned mail. He read that every year, billions pieces of mail are returned as undeliverable, costing companies and the Postal Service time and money.

So he decided to try to solve the problem. He developed a system that uses barcodes, scanning equipment and computer databases to process returned mail almost entirely automatically. His clients, from financial services companies to marketing companies, generally direct their returned mail to Hungerpiller's company, Return Mail Inc., for processing. Clients can get information about whether the mail was actually correctly addressed and whether there's a more current address.

Hungerpiller says developing Return Mail's system took several years. As part of the process, the company applied for a patent. In 2004, right before Thanksgiving, Hungerpiller got a call with good news. The company would be issued U.S. Patent No. 6,826,548.

"Oh I was so thankful. Best Thanksgiving of my life," he said, describing the phone call as "just a wow moment."

To celebrate he bought decorative copies of the patent for company leaders. His copy, a plaque about the size of a piece of paper, hangs in his office next to a painting of his late father.

"I was crushed. I got a dagger in my back," Hungerpiller said.

And his business suffered.

"Bottom line is that we had to lay off employees," Hungerpiller said, adding that it "suffocated the business."

A spokesman for the Postal Service declined to comment on the case because it is ongoing.

Hungerpiller said he's pleased the Supreme Court wants to at least hear his case. He said what he has been through to get to this point hasn't made him lose faith in his government. Most days he wears an American flag pin, something he has done since 9/11. He calls himself a "proud American."

"This is just a process," he said. "I honestly believe that one day I'll get justice."