Humans aren't reading people's emails, but machines are scanning them. 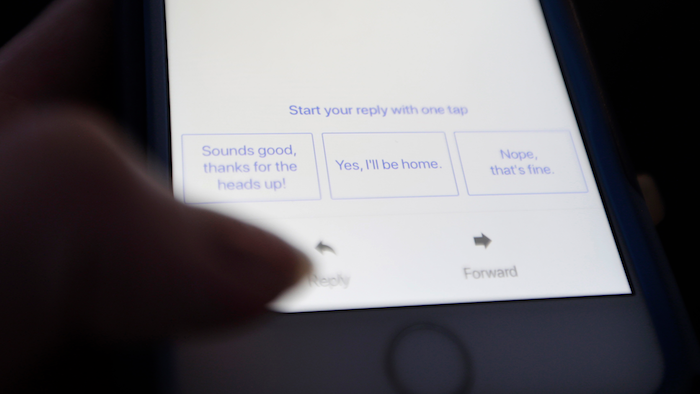 Google is toeing the line between helping you save time and creeping you out as it turns to machines to suggest email replies on your behalf.

The customized auto-responses come in the latest version of Gmail on the web and expand on a feature already available on Android devices and iPhones. They're just one more example of how artificial intelligence is seeping into everyday online life, whether it's to tailor product recommendations or correct spelling.

So far the new feature has been drawing mixed responses from users.

The new feature, called Smart Reply, offers three short responses, like "It was great seeing you too," or "I'll look into it." Unlike standard auto-replies when on vacation, for instance, these are customized to an individual email based on its context. If you select one, you can either send it immediately or edit it before sending.

The responses are automatically created using Google's artificial intelligence systems. Humans aren't reading people's emails, but machines are scanning them. Although Google stopped scanning email to target advertising in 2017, it still scans them to filter out junk mail, identify phishing scams and, now, to create suggested replies. (Yahoo and AOL, both owned by Verizon, still scan email for advertising.)

Google's suggestions draw on the text of your email. Google says it doesn't analyze anything else, like attachments or photos, even though it scans them for security risks. The analysis can include past conversations. For example, if someone says "Thanks!" more often than "Thanks," with no exclamation point, the suggested response would likely reflect that.

Brian Lam, a San Diego attorney who focuses on privacy and data security, said auto-replies represent "a tradeoff between privacy and new features that consumers may want."

Google has been scanning Gmail since its debut in 2004, so scanning for auto-replies shouldn't come as a surprise. Lam said he has no concerns as long as companies disclose they are doing this.

"There's a market incentive to behave responsibly," he said. There's been consumer backlash when people get wind of companies that don't respect privacy. People decide not to use those services."

Not every email will get suggestions — only those that Google thinks will lend themselves to a short reply.

Graham Gardner, a freelance photographer and leather-goods maker in Minneapolis, said he has used smart replies in Gmail several times over the past few months. He said the speed of response can be helpful, particularly if he is on his phone and can reply with one tap.

"It can help with quick replies that don't need too much elaboration, so you can have peace of mind quickly and sort out more specific information in a full reply later," he said.

But Maya Castro, an assignment editor for a TV station in San Francisco, said she sticks to her own voice when emailing, even though she's OK with auto-responses for text messages and Facebook chats.

"It boils down to tone and mood," she said. "Smart- or auto-responses show a lack of thought."

Suggesting responses isn't the only way Google uses artificial intelligence to help people manage their emails, as it has been rolling out a new version of Gmail since April. The new Gmail has "Nudges," a feature that reminds users to reply to emails it deems important. Gmail also prods users who forget to include an attachment to an email that uses the word "attached" or something similar.