Should the team snap its 17-game losing streak, Cleveland revelers will immediately get access to free beer. 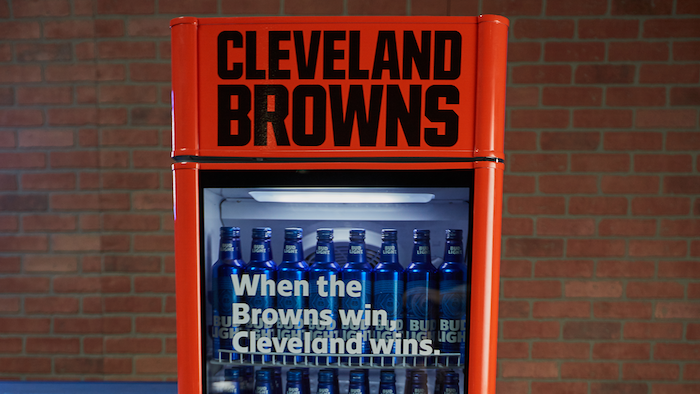 Although internet-connected refrigerators are nothing new, Bud Light is likely taking a novel approach to the technology in its latest promotion.

On Tuesday, the country’s top-selling beer and an Ohio wholesaler began installing smart refrigerators filled with Bud Light in FirstEnergy Stadium — home of the NFL’s Cleveland Browns — and in select bars around metro Cleveland.

The Browns went winless during the 2017 season and haven’t won a game since December 2016. Should the team snap its losing streak during the upcoming season, the “Victory Fridges” will immediately and simultaneously unlock to provide free cans of Bud Light for the occasion.

The appliances use the same technology as the company’s connected “Bud-E Fridge” that debuted in 2015. The new refrigerators, however, are full-size and hold more than 200 16-ounce beer cans, Bud Light officials told Cleveland.com.

About 10 of the refrigerators — complete with chains locked together by an internal, Wi-Fi-connected magnet — will be placed in the “general Cleveland area.”

“We’re proud to show our support for Cleveland, and we’re always looking to bring NFL fans and friends together for memorable experiences,” Bud Light marketing vice-president Andy Goeler said in a statement.

Browns Chief Operating Officer Dave Jenkins added that the promotion “will give our fans a special opportunity to celebrate our first win of the 2018 season.”