The nation has 43 pumped storage facilities with a combined capacity of 22 gigawatts. 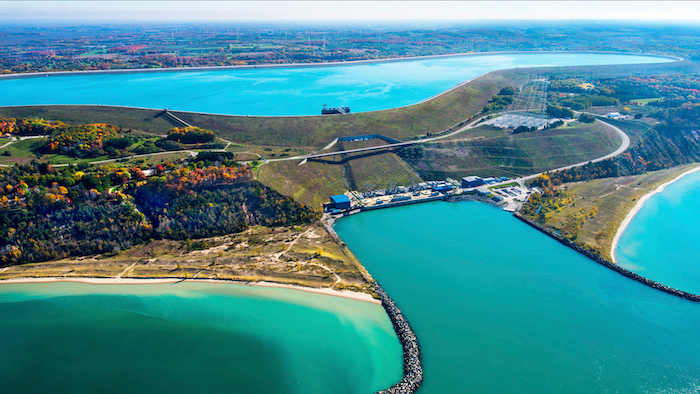 This undated photo provided by Consumers Energy shows an aerial view of the Ludington Pumped Storage Plant near Ludington, Mich. The plant generates electricity by pumping water from Lake Michigan to a reservoir on top of a bluff, then releasing it through giant turbines as needed. Advocates of pumped storage call such facilities the "world's largest batteries."
AP Photo/Consumers Energy

It's part of the Ludington Pumped Storage Plant, which uses simple technology: Water is piped from a lower reservoir — the lake, in this case — to an upper one, then released downhill through supersized turbines.

Supporters call these systems “the world's largest batteries" because they hold vast amounts of potential energy for use when needed for the power grid.

The hydropower industry considers pumped storage the best answer to a question hovering over the transition from fossil fuels to renewable energy to address climate change: where to get power when the sun isn't shining or the wind isn't blowing.

“I wish we could build 10 more of these. I love 'em," Eric Gustad, community affairs manager for Consumers Energy, said during a tour of the Ludington facility.

But the utility based in Jackson, Michigan, has no such plans. Environmental and logistical challenges and potential costs in the billions led Consumers to sell another would-be site near the lake years ago. It's now upgrading the existing plant with co-owner DTE Energy.

Constructing a new one “doesn't make financial sense," Gustad said. “Unless we get some help from the state or federal government, I don't see it happening any time soon."

The company's decision illustrates the challenges facing pumped storage in the U.S., where these systems account for about 93% of utility-scale energy in reserve. While analysts foresee soaring demand for power storage, the industry's growth has lagged.

The nation has 43 pumped storage facilities with a combined capacity of 22 gigawatts, the output of that many nuclear plants. Yet just one small operation has been added since 1995 — and it's unknown how many of more than 90 planned can overcome economic, regulatory and logistical barriers that force long delays.

Three projects have obtained licenses from the Federal Energy Regulatory Commission, but none are being built. Developers of a long-planned Oregon facility expect work to begin in 2023. A Montana company that got a license five years ago needs a utility to operate the plant and buy its storage capacity before construction starts.

By contrast, more than 60 are being built worldwide, mostly in Europe, India, China and Japan.

“The permitting process is crazy,” Malcolm Woolf, president of the National Hydropower Association, complained during a January hearing of the Senate Energy and Natural Resources Committee, saying it involves too many agencies.

Although FERC permits new facilities and relicenses existing ones, other federal, state and tribal offices have roles, spokesperson Celeste Miller said. “Every project is unique. All have various case-specific issues,” she said.

The industry is lobbying for an investment tax credit similar to what solar and wind get. President Joe Biden’s Build Back Better plan includes the tax break but is stuck in Congress.

Pumped storage dates from the early 1930s. But most systems were built decades later to warehouse excess electricity from nuclear plants and release it when needed.

“We’re going to bring hundreds of gigawatts of clean energy onto the grid over the next few years and we need to be able to use that energy wherever and whenever it’s needed,” Energy Secretary Jennifer Granholm said last year.

But the study didn't examine whether sites would meet environmental or cultural protection standards or be commercially viable. Its website acknowledged, “Many or even most ... may prove to be unsuitable."

But recent designs envision “closed-loop” systems that tap a surface or underground supply, then repeatedly cycle that water between reservoirs. Water would be added only to make up for evaporation or leaks.

Yet some are drawing resistance, including the Goldendale Energy Storage Project in Washington state. It would pipe water between two 60-acre (24.3-hectare) reservoirs on opposite sides of a hill.

The facility could power nearly 500,000 homes for up to 12 hours, according to Rye Development, spearheading the project. It's seeking FERC licensing and is scheduled to go online in 2028 but still needs a state water quality permit.

Environmental groups fear harm to wetlands and wildlife habitat, while tribes say the project would encroach on a sacred site.

“What are we willing to sacrifice to get this technology online?" said Bridget Moran, an associate director of American Rivers.

Developers say the project would include cleanup of the polluted lower reservoir area.

The U.S. Department of Energy has launched a web-based tool to help developers find the best locations.

A recent Michigan Technological University study identified hundreds of abandoned U.S. mines that could host pumped storage, with upper reservoirs at or near the surface and lower ones below ground.

They are close enough to transmission and distribution infrastructure and to solar and wind generating facilities, the report says.

“All these holes in the ground are ready to go," said study co-leader Roman Sidortsov, an energy policy associate professor.

But while some decommissioned mines might be better for the environment, a project in New York's Essex County stalled over water pollution concerns.

As the market for stored energy grows, new technologies are emerging.

Texas-based Quidnet Energy has developed a pumped storage offshoot that forces water underground, holds it amid rock layers and releases it to power turbines. The company announced a project in March with San Antonio's municipal utility.

Energy Vault, a Swiss startup, devised a crane powered by renewable energy to lift and stack 35-ton bricks. When energy is needed, the bricks are lowered by cables that spin a generator.

For now, batteries are the leading competitor to pumped storage plants, which can generate power for eight to 16 hours. Lithium-ion batteries typically last up to four hours but longer-duration ones are in the works.

“Are we going to get to the point where an eight-hour battery is cheaper than a pumped storage plant? That’s the billion-dollar question,” said Paul Denholm, an analyst with the National Renewable Energy Laboratory.

A 2016 Energy Department report said the U.S. network has a potential for 36 gigawatts of new pumped storage capacity.

“We don’t think pumped storage is the be-all, end-all but it’s a vital part of our storage future,” said Cameron Schilling, vice president of markets for the hydropower association. “You can’t decarbonize the system without it.”