It hopes to obtain approval next summer and start releasing water in 2023. 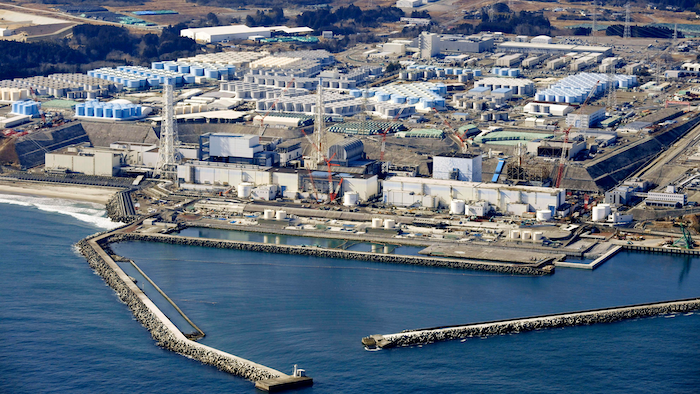 TOKYO (AP) — The operator of the wrecked Fukushima nuclear plant said Tuesday it has applied for approval from safety authorities to construct an undersea tunnel and other facilities needed for the planned release of large amounts of treated radioactive water into the sea.

The operator, Tokyo Electric Power Company Holdings, said it hopes to obtain approval from the Nuclear Regulation Authority to begin constructing the facilities in June and start releasing the water in April 2023.

The approval would cover the basic plan and design of the undersea tunnel, equipment to dilute the water with sea water and other necessary materials.

TEPCO plans to release massive amounts of treated but still radioactive water into the ocean about 1 kilometer (0.6 mile) from the plant to ensure safety and minimize the impact on local fishing and the environment.

The contaminated water is to be diluted with large amounts of seawater to reduce the concentration of radioactive materials below allowable limits.

About 1,000 storage tanks at the plant currently filled with radioactive water need to be removed to make room for facilities necessary for the plant’s decommissioning, TEPCO says.

An official in charge of the water discharge project, Junichi Matsumoto, said TEPCO will construct the undersea tunnel by drilling through bedrock in the seabed.

Under the plan TEPCO submitted to the nuclear authority, the water will be released about 12 meters (40 feet) below the ocean’s surface.

Increasing amounts of radioactive water have been stored at the Fukushima Daiichi plant since 2011, when a massive earthquake and tsunami damaged three reactors and their cooling water became contaminated and began leaking. The plant says the storage tanks currently hold about 1.29 million tons of water and will reach their capacity of 1.37 million tons by early 2023.

The government in April approved the decision to start discharging the water into the Pacific Ocean under safety standards set by regulators, calling it the most realistic option. The idea has been fiercely opposed by fishermen, residents and neighboring countries including China and South Korea.

Japan has requested assistance from the International Atomic Energy Agency to ensure the discharge meets international safety standards and to gain the understanding of the international community.

The release, with an annual cap on radioactive materials, will continue for about 30 years, or until the plant’s decommissioning ends, TEPCO has said.

Government and TEPCO officials say tritium, which is not harmful in small amounts, cannot be removed from the water, but all other isotopes selected for treatment can be reduced to safe levels before release.