But the new technology is still years away from replacing the industry's World War II-era diesel workhorses. 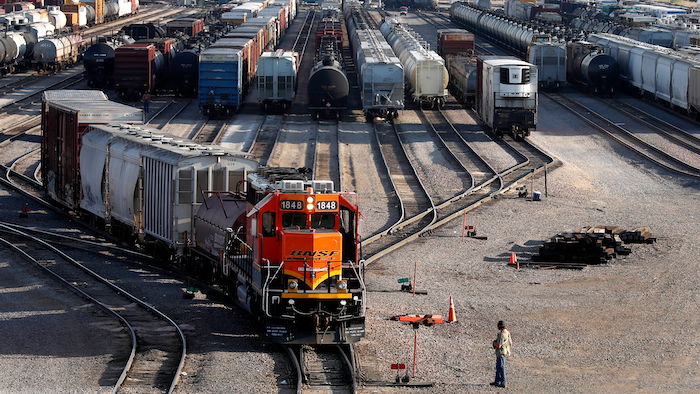 OMAHA, Neb. (AP) — The major freight railroads across North America continue to experiment with alternative locomotive fuels as a way to reduce their greenhouse gas emissions.

Several other past tests at other railroads have looked at natural gas powered locomotives and battery powered options. Using some combination of these new fuel options will be key to helping the railroads achieve their goals to significantly cut their emissions in the coming years.

Both of the major locomotive manufacturers, Wabtec and Caterpillar's Progress Rail unit, are working on developing locomotives that use other fuels.

But the railroads all caution that these are only pilot tests at this stage, and the new technology won't be ready to start replacing the diesel workhorses that have been pulling freight across the continent since World War II for at least several more years.

"This technology could one day be a lower-carbon solution for line-haul service, as it has the potential to reduce carbon emissions and remain cost competitive," said John Lovenburg, BNSF's vice president of environmental.

Wabtec's Vice President of Engineering Alan Hamilton said his company is already selling a production version of its battery-powered locomotive to some railroads after it was tested out in California earlier this year. And Wabtec is working on a variety of other approaches to improve the efficiency of all its locomotives regardless of the fuel they use. But the major railroads will likely phase in the new technology gradually as they upgrade their locomotives over time.

“We really aren’t focused on just one technology,” Hamilton said. “We’re focused on a whole range of technologies and how they work in the customer's network.”

BNSF didn't say how quickly it expects the hydrogen-powered locomotive from Progress Rail it plans to use will be ready to try out while a Canadian Pacific spokesman said it plans to begin using three hydrogen-powered locomotives around the province of Alberta sometime next year. CP received a $15 million grant earlier this year to double the amount it planned to invest in the program.

Before the railroads could make wholesale changes in their locomotive fleets, they would have to invest millions in new fueling stations and other infrastructure. And any changes would likely have to be somewhat standardized across the industry because the major freight railroads regularly pass locomotives back and forth to keep trains moving efficiently.

BNSF said it plans to work with Chevron to help set up the fueling infrastructure it will need for its hydrogen test.

The Association of American Railroads trade group points out that railroads are already significantly more efficient than trucks at delivering freight. On average, freight railroads haul one ton of freight more than 480 miles per gallon of fuel, but the major U.S. railroads still consume more than 3.4 million gallons of diesel fuel each year.

The railroads already invest in an assortment of measures that help them improve the efficiency of its trains, including systems that operate like cruise control to help engineers use the least amount of fuel possible as they cross the countryside.

“Every locomotive, piece of equipment and operational decision is an opportunity to reduce fuel usage and drive down emissions," said Ian Jefferies, president of the rail trade group. "Working with suppliers, railroads are piloting alternative and lower carbon solutions across the nation capable of delivering for both the economy and environment.”

In addition to experimenting with locomotive fuels, Norfolk Southern also recently announced a plan to invest in 800 new railcars that each weight 15,000 pounds less than the current cars in use, which will also help reduce emissions.