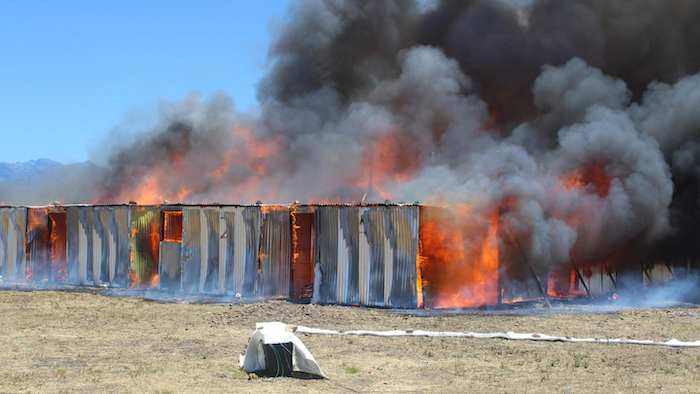 This is one of the major results of the world's largest informal settlement fire experiment consisting of twenty homes.

The experiment was conducted by the Fire Engineering Research Unit at Stellenbosch University (FireSUN) in collaboration with the Western Cape Disaster Management, Fire & Rescue Services and the Breede Valley Municipality (BVM) Fire Department who hosted the experiment and provided significant assistance to the overall research efforts. The work forms part of a collaborative project with the University of Edinburgh looking at how to reduce the impact of such fires, which has been funded by the UK-based Global Challenges Research Fund.

The results of the experiment have been published recently in Fire Technology, one of the leading academic journals in fire safety.

"People often criticize the Fire Department for not acting swiftly, but our experiment showed that a fire can move really, really fast. Firefighters have always known this, but now we have better experimental data to understand the problem and analyze interventions," says Prof Richard Walls from FireSUN who managed the overall project.

"From our experiment we could see that certain interventions currently being implemented would have been ineffective for slowing down this fire. For instance, fire-resistant paint would have had little impact due to the intensity of the fire and the fact that the fire ignited homes through any small openings in these structures, negating the influence of coatings. Also, doors and windows in a densely-packed settlement will always provide an easy entrance for fire."

The experiment was designed by Walls' colleague Dr Nico de Koker who also analyzed the results.

He says the experiment was designed to simulate a 'fire line' which would be found in a dense settlement as a large fire moves through it. "We included extensive instrumentation, thermal-imaging cameras, a drone and other equipment in the experiment to provide data on flame lengths, temperatures experienced, spread rates and details regarding when homes ignited."

Walls points out that from the time the first homes were ignited until the time the last homes caught alight was around five minutes.

"This is a frightening figure when it is considered that often it can take many minutes for a resident to notice a fire, to contact the local fire brigade (often the wrong number is called), a fire truck to be dispatched and then possibly has to drive a long distance, for fighters to find the burning dwellings (in the midst of a settlement with no street names), to setup and finally extinguish the fire."

"After around 16 minutes there were almost no homes left standing in the experiment, there was simply a pile of scrap metal lying on the floor. Temperatures of up to around 1200°C were measured, and flames many meters long emerged from dwellings."

Highlighting the value of the experiment, Deputy Fire Chief Josephus Pretorius of the BVM notes that their firefighters regularly risk their lives to fight these very dangerous fires. "It is exciting that our municipality has been able to make this research possible, so that we can better understand how these fires spread and behave."

Echoing his sentiments, Marlu Rust of the Western Cape Disaster Management, Fire & Rescue Services explains that "We have been actively working on ways to improve fire safety in informal settlements, and have worked closely with Stellenbosch University over the past years. Our fire departments have major challenges in trying to fight such fires so it is important that government, academia and communities are working together to find solutions."

Walls says that from this research experiment, and many others, the team has been developing a good understanding of fire spread in settlements.

"Although there are no easy solutions to the problem, at least the data is immediately showing what sort of interventions are likely to be less effective. Computer models have been developed to simulate fire spread through settlements, and may soon be useful decision-making tools for analyzing risk in settlements, and potentially for developing fire safety strategies."

Walls adds that this experiment, amongst others, also helped to shed light on the performance of products (e.g. detectors, fire-resistant paints, extinguishers and warning systems to municipalities) used to prevent an informal settlement fire; how fast these fires spread; and how to suppress them as efficiently as possible and how communities can assist.

He says a final set of experiments conducted after this large-scale test are currently being analyzed to provide further insight on a number of aspects. Also, a series of tests have been undertaken to understand the effectiveness of community-based suppression systems.