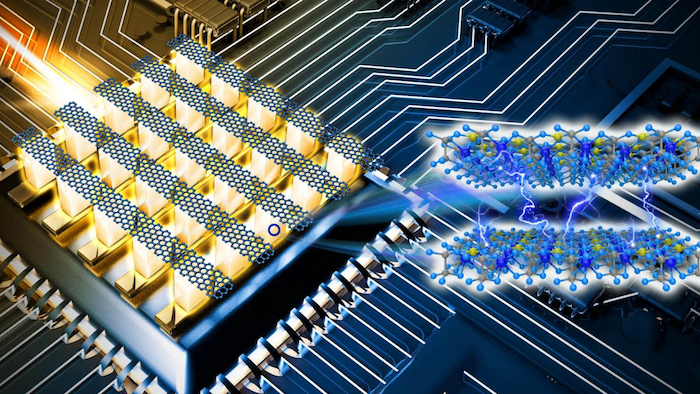 Memory devices come in many forms. From USB sticks, to external hard-drives, to chips implanted directly into smartphones. What makes one better than another is usually a combination of new, groundbreaking materials and the novel device structure. The better the materials, and the way those materials are creatively designed to build the ultimate structure, the better the memory device is. Now, researchers have published a piece in Nature Electronics about their creation of a memory device with improved material and structure and which promises to increase data upload speed, extend smartphone battery life, and reduce data corruption.

Han Wang, associate professor of electrical and computer engineering at the University of Southern California Viterbi School of Engineering, along with postdoctoral scholar Jiangbin Wu, PhD students Hung-Yu Chen and Xiaodong Yan, have achieved this through a concept called the ferroelectric tunneling junction (FTJ).

This new memory device is part of a family known as non-volatile memory devices, meaning they can be unplugged and still retain their data, much like cell phone memory and USB flash drives. Unlike current FTJ devices, this device is comprised of asymmetric metal and semi-metallic graphene materials. By taking these materials and building them into a novel structure, they were able to exceed the performance of all previously demonstrated FTJs while offering promising prospects for integration with silicon electronics.

"This breakthrough will have a significant impact on future electronics for the U.S. Army, enabling man-portable electronic systems with improved size, weight, and power," said Dr. Joe Qiu, program manager for solid-state electronics and electromagnetics at ARO, which sponsored this project.

Furthermore, the unique ability of these materials to approach atomic-scale thickness can eventually lead to even faster and more energy-efficient FTJ memory down the line. "These materials allow us to build devices that can potentially be scaled to atomic-scale thickness," Wang said. "This means the voltage required to read, write, and erase data can be drastically reduced which in turn can make the memory electronics much more energy efficient."

Wang and his fellow researchers hope that with time, their device can be scaled up and may become a replacement not just for the non-volatile memory that we see in cell phones and USB sticks, but also volatile memory like D-RAM storage devices commonly found in computers. In addition, the device may also be engineered to hold multi-bit data states within a single cell, and with its robust endurance and retention, it has promising potential for applications in in-memory computing and other computing hardware.

Nearby residents are on edge over the fate of the plants.
Jan 15th, 2021
Follow Us
Most Recent