The issue could derail PG&E's plan to emerge from bankruptcy. 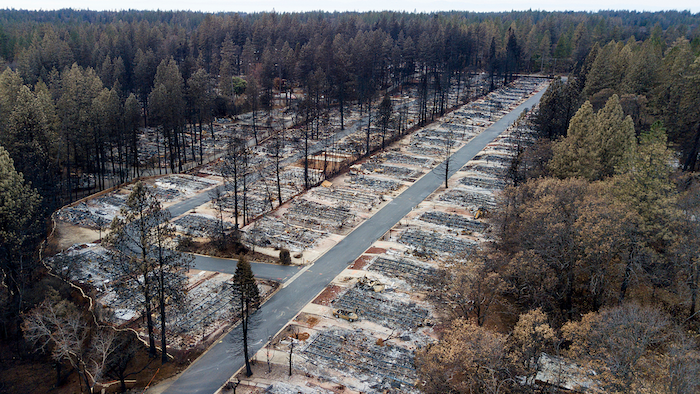 BERKELEY, Calif. (AP) — Lawyers who negotiated a crucial $13.5 billion deal for the victims of deadly wildfires caused by Pacific Gas & Electric equipment are expressing serious doubts about whether the nation's largest utility will be able to pay the full amount as the economy sinks toward a recession.

The red flag raised in court documents filed Monday threatens to derail PG&E's plan to emerge from bankruptcy this summer before Northern California's wildfire season enters its most dangerous period.

The concern centers on the recent stock market tumult triggered by the coronavirus that has dramatically shifted the financial landscape since PG&E struck the $13.5 billion settlement with wildfire victims in December.

The deal calls for half the promised payments to be made in PG&E stock that would make wildfire victims major shareholders in the company responsible for upending their lives. The stock portion of the settlement has not been popular among many victims, and the steep downturn in the stock market during the past two months has escalated the concerns that the settlement is no longer worth $13.5 billion.

PG&E's shares have been hit especially hard, losing more than half their value since reaching a six-month high of $18.34 on Feb. 11. The company's stock rose 63 cents to close Monday at $8.56.

In previous court documents, some of the victims' attorneys asserted the PG&E stock pledged in the settlement is now worth $4.85 billion, a 28% reduction from the original amount. The estimate was based on the calculations of Eric Lowrey, a veteran investment banker who now focuses on financial restructurings.

Attorneys representing the victims' committee have asked U.S. Bankruptcy Judge Dennis Montali for permission to send out a letter detailing potential pitfalls of the settlement.

The committee “has tried to get PG&E to fix the problems to comply with the intent of the settlement, but so far PG&E has not fixed them," said Michael Carlson, general counsel for Caymus Vineyards in Rutherford, California, and a member of the committee.

The proposed letter to wildfire victims, and the dispute underlying it, is expected to be the focus of a bankruptcy hearing scheduled Tuesday.

If Montali signs off on the letter, it would also advise the fire victims to hold off on voting on the PG&E's bankruptcy plan until May 2, which would give PG&E until April 28 to fix the potential flaws now seen in the deal. The voting is supposed to be completed by May 15. PG&E is scrambling to get out of bankruptcy by June 30 to meet a deadline to qualify for coverage from a wildfire insurance fund created by California

PG&E said Monday it understands the reasons for the anxiety about its deal with fire victims but insisted the settlement still represents the best hope for compensating them for their losses as soon as possible. The company also pointed out that its stock price is still higher than its average price during the two months before its Dec. 6 deal with the victims was reached. PG&E's stock traded as low as $3.55 and as high as $12.29 during that two-month window last fall.

“The risk of the stock price fluctuating was well understood by all parties," at the time the settlement was struck, PG&E said.

In a brief also filed Monday, lawyer Gerald Singleton urged Montali to reject the request to send out the proposed letter, saying it exposes victims to unnecessary risk and confusion. Singleton is working on a legal team that represents more than 7,000 wildfire victims.

The lawyers who want to send out the letter work for a committee that is supposed to represent the interests of all wildfire victims, but they represent a minority of the more than 81,000 people who have filed claims in the bankruptcy case, Singleton said. The victims' committee has been whittled to eight members after three people quit in the past two weeks in protest over the $13.5 billion deal with PG&E.

In his brief, Singleton also urged the judge to consider disbanding the committee because it has already “fulfilled its function.”