Instead of harmful refrigerants, the device uses water and salt. 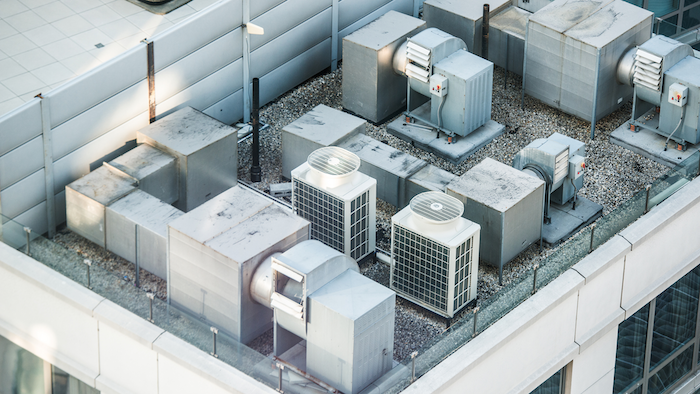 Space cooling and heating is a common need in most inhabited areas. In Europe, the energy consumed for air conditioning is rising, and the situation could get worse in the near future due to the temperature increase in different regions worldwide. The increasing cooling need in buildings especially during the summer season is satisfied by the popular air conditioners, which often make use of refrigerants with high environmental impact and also lead to high electricity consumption. So, how can we reduce the energy demand for building cooling?

A new study comes from a research group based at the Politecnico di Torino (SMaLL) and the National Institute of Metrological Research (INRiM), who has proposed a device capable of generating a cooling load without the use of electricity: the research has been published in Science Advances. Like more traditional cooling devices, this new technology also exploits the evaporation of a liquid. However, the key idea proposed by the Turin researchers is to use simple water and common salt instead of chemicals that are potentially harmful for the environment. The environmental impact of the new device is also reduced because it is based on passive phenomena, i.e. spontaneous processes such as capillarity or evaporation, instead of on pumps and compressors that require energy and maintenance.

"Cooling by water evaporation has always been known. As an example, Nature makes use of sweat evaporation from the skin to cool down our body. However, this strategy is effective as long as air is not saturated with water vapor. Our idea was to come up with a low-cost technology capable to maximize the cooling effect regardless of the external water vapor conditions. Instead of being exposed to air, pure water is in contact with an impermeable membrane that keeps separated from a highly concentrated salty solution. The membrane can be imagined as a porous sieve with pore size in the order of one millionth of a meter. Owing to its water-repellent properties, our membrane liquid water does not pass through the membrane, whereas its vapor does. In this way, the fresh and salt water do not mix, while a constant water vapor flux occurs from one end of the membrane to the other. As a result, pure water gets cooled, with this effect being further amplified thanks to the presence of different evaporation stages. Clearly, the salty water concentration will constantly decrease and the cooling effect will diminish over time; however, the difference in salinity between the two solutions can be continuously - and sustainably - restored using solar energy, as also demonstrated in another recent study from our group", explains Matteo Alberghini, PhD student of the Energy Department of the Politecnico di Torino and first author of the research.

The interesting feature of the suggested device consists in its modular design made of cooling units, a few centimeters thick each, that can be stacked in series to increase the cooling effect in series, as happens with common batteries. In this way it is possible to finely tune the cooling power according to individual needs, possibly reaching cooling capacity comparable to those typically necessary for domestic use. Furthermore, water and salt do not need pumps or other auxiliaries to be transported within the device. On the contrary, it "moves" spontaneously thanks to capillary effects of some components which, like in kitchen paper, are capable of absorbing and transporting water also against gravity.

"Other technologies for passive cooling are also being tested in various labs and research centers worldwide, such as those based on infrared heat dissipation into the outer space - also known as radiative passive cooling. Those approaches, although promising and suitable for some applications, also present major limitations: the principle on which they are based may be ineffective in tropical climates and in general on very humid days, when, however, the need for conditioning would still be high; moreover, there is a theoretical limit for the maximum cooling power. Our passive prototype, based instead on evaporative cooling between two aqueous solutions with different salinities, could overcome this limit, creating a useful effect independent of external humidity. Moreover, we could obtain an even higher cooling capacity in the future by increasing the concentration of the saline solution or by resorting to a more sophisticated modular design of the device" commented the researchers.

Also due to the simplicity of the device assembly and the required materials, a rather low production cost can be envisioned, in the order of a few euros for each cooling stage. As such, the device could be ideal for installations in rural areas, where the possible lack of well-trained technicians can make operation and maintenance of traditional cooling systems difficult. Interesting applications can also be envisioned in regions with large availability in water with high saline concentration, such as coastal regions in the vicinity of large desalination plants or nearby salt marshes and salt mines.

As of now, the technology is not yet ready for an immediate commercial exploitation, and further developments (also subject to future funding or industrial partnerships) are necessary. In perspective, this technology could be used in combination with existing and more traditional cooling systems for effectively implementing energy saving strategies.