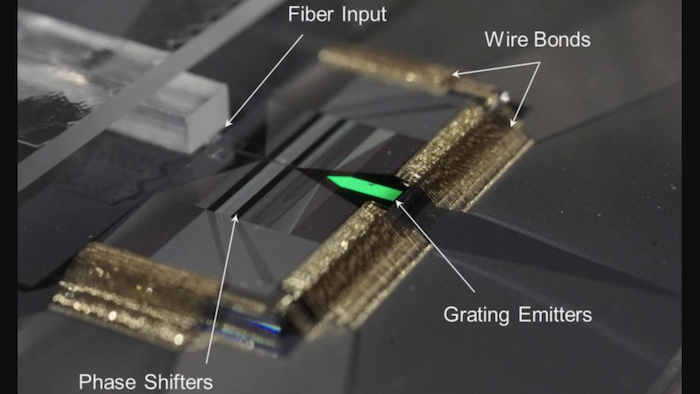 New York — While beam steering systems have been used for many years for applications such as imaging, display, and optical trapping, they require bulky mechanical mirrors and are overly sensitive to vibrations. Compact optical phased arrays (OPAs), which change the angle of an optical beam by changing the beam's phase profile, are a promising new technology for many emerging applications. These include ultra-small solid-state LiDAR on autonomous vehicles, much smaller and lighter AR/VR displays, large-scale trapped-ion quantum computer to address ion qubits, and optogenetics, an emerging research field that uses light and genetic engineering to study the brain.

Long-range, high-performance OPAs require a large beam emission area densely packed with thousands of actively phase-controlled, power-hungry light-emitting elements. To date, such large-scale phased arrays, for LiDAR, have been impractical since the technologies in current use would have to operate at untenable electrical power levels.

Researchers led by Columbia Engineering Professor Michal Lipson have developed a low-power beam steering platform that is a non-mechanical, robust, and scalable approach to beam steering. The team is one of the first to demonstrate low-power large-scale optical phased array at near infrared and the first to demonstrate optical phased array technology on-chip at blue wavelength for autonomous navigation and augmented reality, respectively. In collaboration with Adam Kepecs' group at Washington University in St. Louis, the team has also developed an implantable photonic chip based on an optical switch array at blue wavelengths for precise optogenetic neural stimulation. The research has been recently published in three separate papers in Optica, Nature Biomedical Engineering, and Optics Letters.

"This new technology that enables our chip-based devices to point the beam anywhere we want opens the door wide for transforming a broad range of areas," says Lipson, Eugene Higgins Professor of Electrical Engineering and Professor of Applied Physics. "These include, for instance, the ability to make LiDAR devices as small as a credit card for a self-driving car, or a neural probe that controls micron scale beams to stimulate neurons for optogenetics neuroscience research, or a light delivery method to each individual ion in a system for general quantum manipulations and readout."

Lipson's team has designed a multi-pass platform that reduces the power consumption of an optical phase shifter while maintaining both its operation speed and broadband low loss for enabling scalable optical systems. They let the light signal recycle through the same phase shifter multiple times so that the total power consumption is reduced by the same factor it recycles. They demonstrated a silicon photonic phased array containing 512 actively controlled phase shifters and optical antenna, consuming very low power while performing 2D beam steering over a wide field of view. Their results are a significant advance towards building scalable phased arrays containing thousands of active elements.

Phased array devices were initially developed at larger electromagnetic wavelengths. By applying different phases at each antenna, researchers can form a very directional beam by designing constructive interference in one direction and destructive in other directions. In order to steer or turn the beam's direction, they can delay light in one emitter or shift a phase relative to another.

Current visible light applications for OPAs have been limited by bulky table-top devices that have a limited field of view due to their large pixel width. Previous OPA research done at the near-infrared wavelength, including work from the Lipson Nanophotonics Group, faced fabrication and material challenges in doing similar work at the visible wavelength.

"As the wavelength becomes smaller, the light becomes more sensitive to small changes such as fabrication errors," says Min Chul Shin, a PhD student in the Lipson group and co-lead author of the Optics Letter paper. "It also scatters more, resulting in higher loss if fabrication is not perfect--and fabrication can never be perfect."

It was only three years ago that Lipson's team showed a low-loss material platform by optimizing fabrication recipes with silicon nitride. They leveraged this platform to realize their new beam steering system in the visible wavelength--the first chip-scale phased array operating at blue wavelengths using a silicon nitride platform.

A major challenge for the researchers was working in the blue range, which has the smallest wavelength in the visible spectrum and scatters more than other colors because it travels as shorter, smaller waves. Another challenge in demonstrating a phased array in blue was that to achieve a wide angle, the team had to overcome the challenge of placing emitters half a wavelength apart or at least smaller than a wavelength--40 nm spacing, 2500 times smaller than human hair--which was very difficult to achieve. In addition, in order to make optical phased array useful for practical applications, they needed many emitters. Scaling this up to a large system would be extremely difficult.

"Not only is this fabrication really hard, but there would also be a lot of optical crosstalk with the waveguides that close," says Shin. "We can't have independent phase control plus we'd see all the light coupled to each other, not forming a directional beam."

Solving these issues for blue meant that the team could easily do this for red and green, which have longer wavelengths. "This wavelength range enables us to address new applications such as optogenetic neural stimulation," notes Aseema Mohanty, a postdoctoral research scientist and co-lead author of the Optics Letter and Nature Biomedical Engineering papers. "We used the same chip-scale technology to control an array of micron-scale beams to precisely probe neurons within the brain."

The team is now collaborating with Applied Physics Professor Nanfang Yu's group to optimize the electrical power consumption because low-power operation is crucial for lightweight head-mounted AR displays and optogenetics.

"We are very excited because we've basically designed a reconfigurable lens on a tiny chip on which we can steer the visible beam and change focus," explains Lipson. "We have an aperture where we can synthesize any visible pattern we want every few tens of microseconds. This requires no moving parts and could be achieved at chip-scale. Our new approach means that we'll be able to revolutionize augmented reality, optogenetics and many more technologies of the future."