Approval by the Federal Energy Regulatory Commission would likely set up a court battle with Oregon officials. 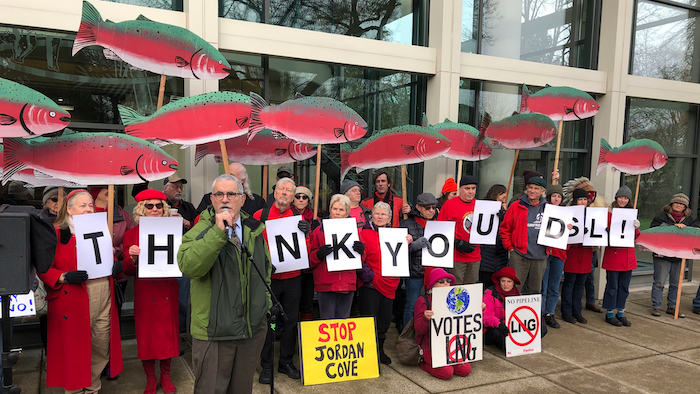 SALEM, Ore. (AP) — Thursday was the day that a federal agency had been expected to make a decision on a proposed natural gas pipeline and marine export terminal in Oregon, and both opponents of the project and the Canadian energy company behind it awaited word from Washington.

But Thursday came and went, and the Federal Energy Regulatory Commission, or FERC, only announced that the mega-project would be part of a crowded agenda when it meets on Feb. 20. If the commission approves the project, which lacks state permits, it would likely set up a court battle over state's rights.

Oregon Gov. Kate Brown, also Democrat, said through a spokeswoman last month that she "would consider all available options to safeguard the health and environment of Oregon” if the federal government were to ignore state permitting processes. The Trump administration in August proposed streamlining approval of gas pipelines and other energy projects by limiting states’ certification authorities under the U.S. Clean Water Act.

The proposed natural gas terminal and a 230-mile (370-kilometer) feeder pipeline would permit shipment of natural gas from the United States and Canada to Asia and would be the West Coast's first liquefied natural gas export terminal.

The Oregon Department of Environmental Quality has already denied a water quality certification for the Jordan Cove natural gas export project proposed by Pembina, the Canadian energy company. Pembina withdrew its application for a different state permit and said that it awaits a final determination by the federal commission. Its three current members were all appointed by President Donald Trump.

Paul Vogel, a spokesman for the Jordan Cove project, had been anticipating a decision by FERC on Thursday, but noted it has a busy schedule.

“The Commission will meet on Feb. 20. The item is on the agenda. That’s all I can say,” O'Driscoll said in an email.

Supporters of the project say it would create local jobs. Opponents say it would ruin habitat and that the increased use of a fossil fuel would contribute to global warming.

U.S. Senator Ron Wyden, D-Oregon, on Jan. 27 wrote to President Donald Trump, noting the Federal Energy Regulatory Commission had two vacancies. Wyden urged the president to appoint a full and bipartisan five-member commission before the agency rules on the project.

He said failure to do so would mean any decision could be interpreted as lacking full, fair consideration and therefore being politically motivated.