A government spokesman said his use of the word "stolen" was "a slip of the tongue." 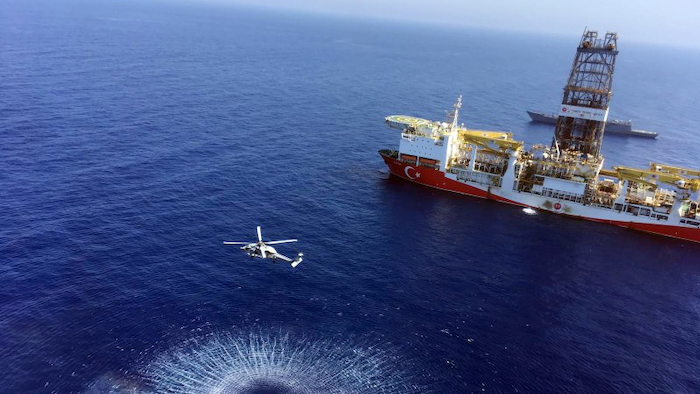 NICOSIA, Cyprus (AP) — Cyprus' government spokesman backpedaled Thursday on a claim that Turkey may have stolen technical data to pinpoint a target for gas drilling in waters where the island nation has exclusive economic rights.

Government spokesman Kyriakos Koushos told The Associated Press that no such data theft had occurred. and his use of the word “stolen” in a Wednesday broadcast by Greece's state broadcaster was a mistaken “a slip of the tongue.”

But Koushos asserted that Turkey did obtain data that enabled it to send a drill ship to a specific location that two energy companies licensed by Cyprus, Eni and Total, had pre-selected to carry out their own exploratory drilling.

Koushos said that data might have been gleaned from a Turkish research vessel that had scoured the area — also known as Block 8 — in search of geological information hinting there were gas deposits locked underneath the seabed.

The government spokesman also said it's unclear whether Turkish authorities may have obtained some information about Block 8 from the Cypriot Environment Ministry's website, which had posted Eni-provided geological data about the area in 2017.

Koushos said that data had to be made public in accordance with laws at the time that were amended in 2018.

Turkey's drilling activities have ratcheted up tensions in the eastern Mediterranean.

Cyprus has denounced Turkey as a “pirate state” for repeatedly sending warship-escorted vessels to drill for gas inside Cyprus' exclusive economic zone, including areas where Italy's ENI and Total of France are licensed to carry out a hydrocarbon search.

Turkey insists it's acting to protect its rights and those of breakaway Turkish Cypriots to the region's energy reserves. Turkey, which doesn't recognize Cyprus as a country, claims a large section of Cyprus' economic zone as falling within its own continental shelf. It also says drilling activities are being carried out following agreements with Turkish Cypriots whose declaration of independence is recognized only by Turkey.

Cyprus was ethnically split in 1974 when Turkey invaded following a coup by supporters of union with Greece. Cyprus joined the European Union in 2004, but only the southern part where the internationally recognized government is seated enjoys full membership.

The leaders also backed efforts for an agreement to reunify Cyprus.

The expressions of support came in meetings that Cypriot President Nicos Anastasiades held in Jerusalem during a forum commemorating the 75th anniversary of the liberation of the Auschwitz death camp operated by Nazi Germany during World War II, according to a Cypriot government statement.