Attorneys for Gov. Gavin Newsom urged a federal judge to reject Pacific Gas and Electric's blueprint for getting out of bankruptcy. 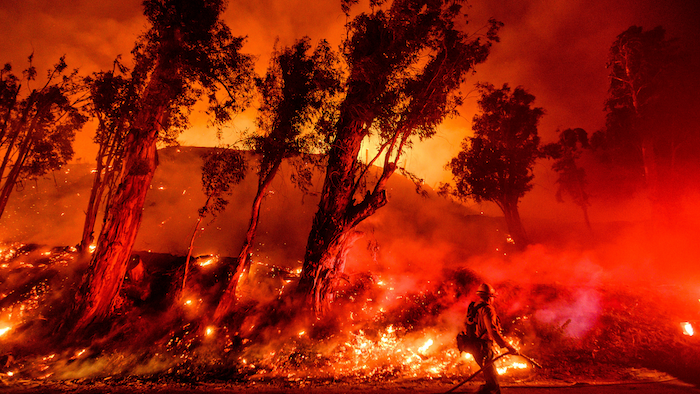 This Nov. 1, 2019, file photo shows flames from a backfire on a hillside as firefighters battle the Maria Fire in Santa Paula, Calif.
AP Photo/Noah Berger, File

SAN FRANCISCO (AP) — California Gov. Gavin Newsom is urging a federal judge to reject Pacific Gas and Electric's blueprint for getting out of bankruptcy and renewing his threat to lead a bid to turn the beleaguered utility into a government-run operation.

In a court filing Wednesday, Newsom's lawyers gave a sternly worded rebuke of PG&E's plan, escalating the intrigue in the year-old case that will determine the fate of the nation's largest utility. PG&E is trying to dig out of a financial hole created by more than $50 billion in claims stemming from a series of catastrophic wildfires that have been blamed on the San Francisco company.

The Democratic governor's misgivings cast more uncertainty on PG&E's hopes to emerge from bankruptcy by June 30 even as it makes progress on other fronts. The San Francisco company rid itself of another irritant Wednesday by striking a deal with a group of bondholders that had been pushing a competing reorganization plan that had been opposed by PG&E's management.

The truce requires the bondholders to drop their alternative proposal in exchange for PG&E paying them more money than it had originally intended. The company didn't immediately disclose all the financial details, but said it included raising money through a refinancing that would save its customers about $1 billion.

Although he doesn't have the power to block PG&E's preferred route out of bankruptcy, the Democratic governor has tremendous leverage because the company's plan hinges on its ability to draw upon a special insurance fund California created last summer to help insulate utilities from potential wildfire losses in the future. PG&E needs the approval of its top California regulator, the Public Utilities Commission, whose current president, Marybel Batjer, was appointed to the job by Newsom last summer.

In Wednesday's filing, Newsom asserted that PG&E is trying to pressure the Public Utilities Commission into accepting a 'sub-optimal plan."

In a statement, PG&E promised “additional changes to the plan are forthcoming. We will continue to engage with the Governor’s office to address his concerns."

Newsom fired his latest salvo on the eve of a scheduled hearing before U.S. Bankruptcy Judge Dennis Montali that will cover a wide range of unresolved issues in the complex case.

Newsom told Montali that PG&E’s current plan doesn’t meet the requirements needed to participate in the state’s wildfire fund, echoing a point he first made in a Dec. 13 letter to the company informing management the proposal needed a dramatic overhaul.

In his latest objection, Newsom expressed frustration that PG&E hasn’t budged much since he sent that letter nearly six weeks ago despite further talks with representatives from his office. “He is clearly not happy with what has been going on behind closed doors, and he is trying to telegraph that to Judge Montali,” said University of California Hastings College of the Law professor Jared Ellias, who has been closely following the PG&E case.

Newsom fired his latest salvo on the eve of a scheduled hearing before Montali that will cover a wide range of unresolved issues in the complex case.

Although PG&E has won Montali's approval of settlements that will pay a total of $25.5 billion to wildfire victims, insurers and government agencies, the company is still working on the financing to cover those deals while also leaving enough money to pay for billions of dollars in improvements needed for its electricity transmission system.

Newsom blasted PG&E's agreement to pay more than $1 billion in fees to secure financing that he fears will saddle the company with too much debt and undercut its ability to pay for the badly needed upgrades. Without those improvements, PG&E would be more likely to ignite even more fires in the future and probably resort to deliberate blackouts inconveniencing hundreds of thousands of customers to reduce the risks during hot, dry and windy conditions that are expected to become more intense amid climate change.

The governor also has demanded that PG&E replace its entire 14-member board of directors, including current CEO Bill Johnson, even though the company already did a major overhaul of that body responsible for overseeing the utility's management.

Newsom didn't provide any details about how California might finance a takeover of a company with a market value that has been fluctuating between $5 billion and $40 billion in recent years. The elected leaders in various cities and counties in PG&E's sprawling service area also have expressed support for transforming the utility into a non-profit cooperative owned by the government, but analysts still believe that is unlikely to happen.