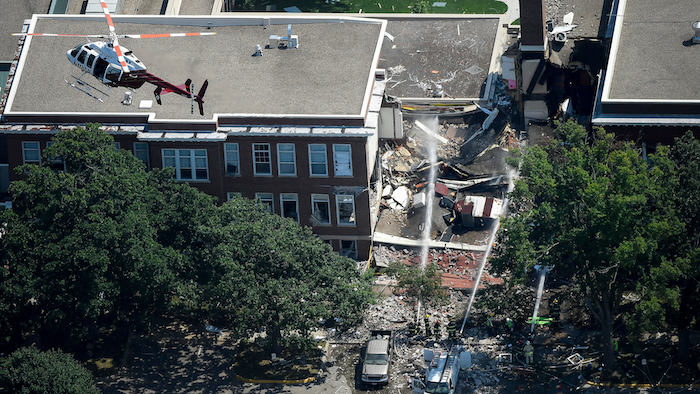 In this Aug. 2, 2017, file photo, emergency workers respond to an explosion at Minnehaha Academy in Minneapolis.
Aaron Lavinsky/Star Tribune via AP, File

MINNEAPOLIS (AP) — Federal investigators have concluded that a deadly explosion at a Minneapolis school in 2017 happened because a pipefitting crew lacked proper training and wasn’t fully authorized to move a gas meter.

The National Transportation Safety Board released its report Monday on the explosion at Minnehaha Academy that killed two people and injured nine more at the private Christian school.

Workers for the natural gas supplier CenterPoint Energy and Eagan-based Master Mechanical Inc. were moving meters on Aug. 2, 2017, when the explosion happened. School was out but some staff members and students were present.

The NTSB says the crew, working for Master Mechnical, mistakenly believed a key valve was closed before they started disassembling the gas installation.

According to the findings, the two-person crew’s foreman did not have the proper licensing and training “to work on the covered tasks” associated with moving the utility’s meters. The foreman’s son, who was helping, had no training for pipefitter work, failed to complete the required CenterPoint Energy’s qualifications program and had only been with Master Mechanical about eight months at the time of the blast, the agency said.

“The probable cause of the natural gas explosion ... occurred when a pipe fitting crew disassembled piping upstream of a gas service meter” that was off-limits to the workers, the agency said.

According to the NTSB, the Master Mechanical workers were not qualified or authorized to demolish piping or work on an existing meter. A valve was opened during that work, leading to the uncontrolled release of gas and the explosion.

The agency also noted that CenterPoint and Master Mechnical failed to have “detailed documentation that clearly established the scope of the work to be done,” and that the lack of such specifics contributed to the explosion.

The only CenterPoint employee in the vicinity at the time was a block away in a company vehicle and waiting for a construction vehicle heading to the work site, the NTSB said.

CenterPoint says it changed its procedures shortly after the accident. Master Mechanical told the Star Tribune it respects the board’s findings.

Students returned to the rebuilt school this August.