The device captures biomechanical energy every time the knee bends. 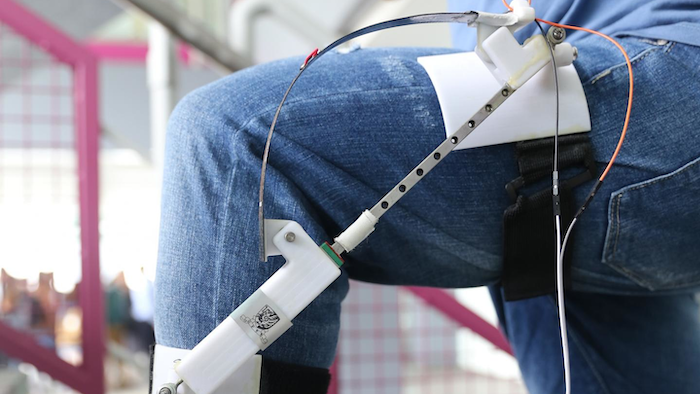 The energy harvester device is extremely light with only 307 grams.
The Chinese University of Hong Kong

Specifically, the device can capture biomechanical energy from the motion of the human knee and then convert it to electricity which can be used to power wearable electronics such as pedometers, health monitors, and GPS.

This work was led by Professor Wei-Hsin Liao from the Department of Mechanical and Automation Engineering, The Chinese University of Hong Kong (CUHK) has been published in Applied Physics Letters and recommended as a featured article by editors. 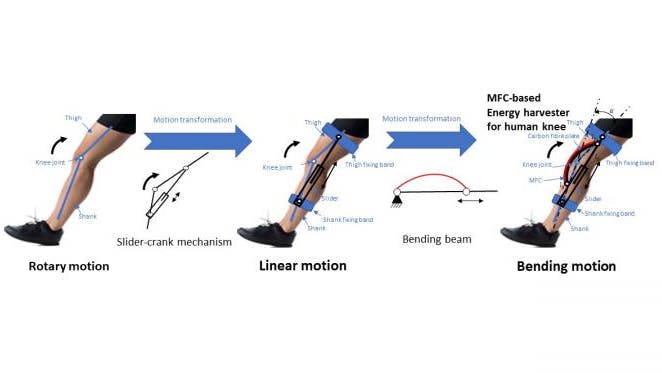 The smart material of the device will bend alongside the motion of the human knee, and convert the biomechanical energy to electricity.The Chinese University of Hong Kong

So far, researchers have developed large devices to use human motion for generating electricity, such as electromagnetic generator-based energy harvesters for capturing energy when people are walking on treadmills or riding bicycles.

However, these bulky devices hamper the users’ locomotion and at the same time increase their burden, because of the considerable weight and large interaction force between the harvesters and the human body.

This considerably restricts the wide use of these devices. To overcome that, a research team led by Professor Liao proposed and developed a lightweight energy harvester employing piezoelectric macro fiber composites integrated with novel mechanical structures.

Piezoelectric macro fiber composites are lightweight materials, which can produce electricity under deformation. The proposed energy harvester employs a bending beam and a slider-crank mechanism to capture the motion of the human knee when walking. Then, the captured motion is used to deform piezoelectric macro fiber composites pieces bonded to the bending beam so that electricity is produced when the human knee flexes or extends.

Professor Liao said, “The human knee joint has a larger range of motion than other lower limb joints such as the ankle and hip, which enables energy harvesters to capture the motion more easily and generate more electricity.” The prototype harvester, made by piezoelectric macro fiber composites, can generate an average power of 1.6 mW, when the wearer walks at about 2-6.5 km/h. The generated electricity is efficient to power common wearable electronic devices such as smart bands. Furthermore, the prototype weighs only 307 grams. When walking with it, the wearer’s metabolic cost is almost the same as that when walking without the device. Unlike the existing electromagnetic generator-based energy harvesters, the lightweight smart materials-based energy harvester can capture energy from human motion without increasing the wearer’s burden. It is expected to significantly promote the use of biomechanical energy harvesters.

Professor Liao stated, “This apparatus will attract much attention from mountaineers and hikers. If they get lost in remote mountains or a wilderness where the power grid is unavailable, the device can derive energy from their motion and convert it to electricity, enabling wearers to continuously monitor their vital signs, know their position, or even send out an SOS signal at any time when they need help. At present, we are focusing on improvement in the performance of the harvester by reducing the weight of the device and increasing energy harvesting efficiency. We plan to commercialize the harvester and market it through cooperating with garment manufacturers to embed the device in sportswear.”