Thousands of people had to flee their homes in the dark. 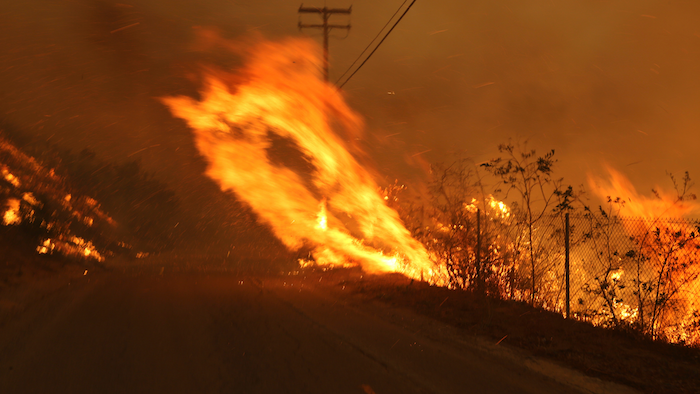 In this Nov. 9, 2018 file photo Wind-driven flames from a wildfire race up a slope and cross the road in Malibu, Calif. known as the Woolsey Fire, it has consumed tens of thousands of acres and destroyed multiple homes. Southern California Edison announced in its quarterly earnings report that its equipment probably caused the November 2018 Woolsey Fire that raged from north of Los Angeles through Malibu to the sea, killing three people and burning more than 1,600 homes and other buildings.
AP Photo/Reed Saxon, File

A fire that broke out early Monday morning near the J. Paul Getty Museum was sparked after high winds blew a eucalyptus branch onto an electric line that caused it to arc, ignite dry grass and destroy a dozen homes, according to preliminary findings announced by the Los Angeles Department of Water and Power utility and the Fire Department.

Meanwhile, Southern California Edison announced that it believes its equipment caused the deadly Woolsey fire last year northwest of Los Angeles that scorched dry grasslands and burned across the Santa Monica Mountains all the way to the coast.

SoCal Edison said the fire department had not yet released those findings, but the utility conceded in a quarterly earnings report that its equipment was the likely source.

Last year, the company told the state Public Utilities Commission only that its equipment might have caused a power outage before the blaze started.

While lawsuits from victims' families had blamed the utility, the cause is officially still under investigation by SoCal Edison, Cal Fire and the Ventura County Fire Department.

Power lines have been blamed on many of the state's worst fires in recent years, prompting an unprecedented response this fall to cut off power amid dry, gusty conditions.

The state's largest utility, Pacific Gas & Electric Co., has cut power in the past two weeks to millions of Northern California residents. The move followed several deadly wildfires, including one that killed 85 and destroyed the town of Paradise and plunged the company into bankruptcy.

Despite recent outages, PG&E's power lines may have started two smaller fires over the weekend in the San Francisco Bay Area and a massive blaze still burning in Sonoma County wine country, the utility said.

The Los Angeles fire that broke out along Interstate 405 in the middle of the night Monday was in an area where DWP said it trimmed vegetation this summer.

The branch of the eucalyptus, which is a notoriously flammable tree, blew about 30 feet (9 meters) onto the power line, the utility said.

Video shot by a motorist on Interstate 405 in the early morning showed a bright blue flash on the side of the road where the fire started at the base of a brush-covered steep hillside beneath the Getty Center.

"It really was one of those acts of God," Mayor Eric Garcetti said.

Neither the pole nor the line failed. The utility said it was trying to determine who owned the land.

Attorney Gerald Singleton, who has filed numerous lawsuits against utilities, said Garcetti's comment was premature because DWP is city-owned and the utility's role in the fire has not been determined.

"It's a little bit disconcerting to see the person who's ultimately in charge say out of the gate, 'It wasn't our fault,'" he said. "If you've already decided it wasn't your fault, you're not going to do anything to fix the problem."

Singleton said the utility is mandated to trim branches that could cause fires — even if they aren't within the explicit brush clearance zone.

The blaze burned about a square mile (2.5 square kilometers) and continued to smolder Tuesday.

About 9,000 people, including Schwarzenegger and LeBron James, remained under evacuation orders as firefighters warned that hot Santa Ana winds were expected to return and continue into Thursday.