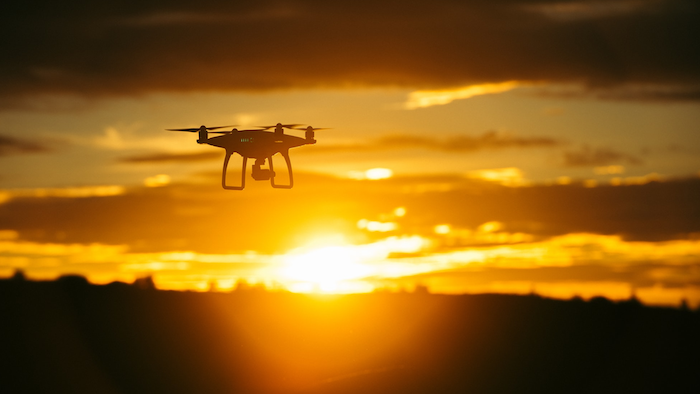 Nicklin is on the front lines of an innovative energy efficiency project in northwestern Minnesota that's using drones to document building heat loss.

The city of Warren, population 1,600, started the project three years ago through its municipal utility. The aim is to develop aerial thermal images of all 700 or so buildings in the community to help identify energy efficiency opportunities.

Nicklin, an instructor of remotely piloted aerial systems at the local Northland Community and Technical College, leads a team of student volunteers who help pilot the drones. The images they collect visualize temperature differences.

"You can see when air is 10 or 20 degrees warmer coming off a roof," Nicklin said. "When you see that, you know there's something going on."

Warren's initiative is among the first in the country to employ drones to detect heat loss in buildings. Shannon Mortenson, Warren's city administrator, said she and other staff members got the idea after visiting the northern German city of Arnsberg as part of the Climate-Smart Municipalities program sponsored by the University of Minnesota's Institute on the Environment.

Leaders from five Minnesota communities meet periodically and visit clean energy projects in Germany and Minnesota. Warren was matched with Arnsberg because both are in agricultural areas and have flood problems caused by riverside locations, Mortenson said.

Arnsberg, with 19,000 residents, is much larger than Warren. It had been using remotely piloted planes outfitted with thermal imaging cameras to detect inefficiencies in buildings. It adopted drones a few years ago after a delegation from Arnsberg visited Minnesota.

Former northwestern Minnesota state legislator LeRoy Stumpf was on the plane with the German delegation. He suggested the group stop by a drone program operated at the airport by Northland Community and Technical College.

City officials from both Arnsberg and Warren realized that drones outfitted with thermal imaging cameras could offer an affordable way to capture leaks in buildings, Mortenson said. Both cities are now taking thermal images of their building stock, a project easier said than done in Minnesota.

Brent McMillan, operations manager for the city, said the weather window for flying drones in Minnesota is narrow. The best conditions for flying thermal imaging drones is at night or in the early morning when roofs have cooled off and the difference between indoor and outdoor temperatures is at least 20 degrees.

The best temperatures are roughly between 20 and 40 degrees. If the air is too cold, drone batteries don't last as long, McMillan said. Fall is a good season, with nights cool and clear enough for good thermal images, he added.

Nicklin said he makes sure to notify the sheriff's office to warn them he's going to be flying drones that night in case homeowners call with concerns. More than a few have called the sheriff but the project has not stirred up any resentment or persistent criticism, Nicklin said.

Wind, rain and snow have been harder to overcome and can make drone flying near impossible, he said. The first year he did not get a federal aviation waiver either, severely limiting the hours he could fly drones.

Nicklin, a volunteer on this project, usually recruits students to assist on drone shoots. Just finding a time he and a student helper are available has been difficult, he said, especially since he likes to photograph 9 p.m. to as late as 2 a.m.

Arnsberg deployed a different approach than Warren, first gathering data from broad flyovers before determining buildings that should have a closer checkup, he said. Drones in Arnsberg were then used to gather close-up images and data on roof leakage and building envelope inefficiencies, he said.

If the project has a second phase, Nicklin would like to take thermal imaging of the sides of buildings. He took photographs of McMillan's 108-year-old home that provided data allowing a viewer to correctly assess which windows were oldest, and the newest, he said.

The concept of capturing thermal imagery in larger cities could work, Nicklin said, but drones would only be effective on individual buildings. A traditional plane would have to be used to capture entire neighborhoods. Drones are too time-consuming to use on big areas of land and issues would arise in getting authorization to fly over the airspace in cities with busy airports.

Such a project would not be cheap, either, and property owners would need to be convinced the benefits are worth the investment. "Costs would be a reason why folks may shy away from a city-wide job, especially with thermal imagery," he said. "It could also be a factor that not everyone realizes the benefits of thermal imagery when it comes to building envelope inspections and how the information can be used to reduce recurring costs."

While Warren has not yet marketed the results, a few residents have asked to see their drone scans, McMillan said. Due to privacy concerns only homeowners, and not the public or real estate agents, can see the images of their properties. Public properties can be viewed by anyone.

Once the project is completed the city hopes homeowners step forward to use the data for efficiency projects. Local residents have limited money "to spend on a home improvement project, and this might give them some insight," McMillan said. "It will help answer the questions of 'do I need a new furnace? Or more insulation and new windows?'"

Mortenson wants to benchmark public buildings in the city and see how they perform against state building standards. She also wants to see the city help homeowners pay for home improvements.

Beyond homeowners, the local school and government buildings may be among the first to use drone data to guide efficiency investments, McMillan predicted. How it will all play out remains a bit of a mystery because Warren is breaking new ground. "We're writing the book as we do this," McMillan said.