State regulators approved allowing utilities to cut off electricity to avoid catastrophic wildfires, but said they must do a better job educating the public. 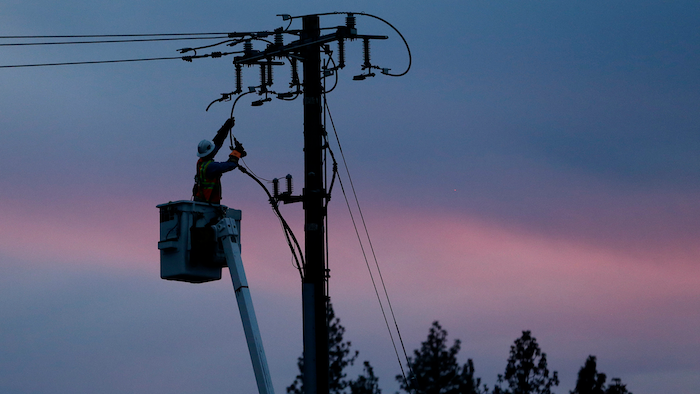 The utility shut down power to areas of Butte, Nevada and Yuba counties in the Sierra Nevada foothills.

The power will remain off until conditions are safer, and PG&E warned that it might expand the precautionary outages on Tuesday to El Dorado, Placer, Sutter, Lake, Napa and Sonoma counties if gusty winds and hot, dry weather continue.

Butte County is where a wildfire blamed on PG&E transmission lines killed 86 people last year and virtually leveled the town of Paradise.

Meanwhile, Southern California Edison warned it might shut off power to 41,000 customers due to forecasts calling for gusty Santa Ana winds.

Strong winds, low humidity and warm temperatures were forecast in the state through Wednesday, and authorities issued an extreme fire danger warning for some areas.

Wind gusts could reach 50 mph (80 kph) in the northern Sierra and foothills, and between 30 to 40 mph (48 to 64 kph) in the Sacramento Valley and near the Pacific coast, said Eric Kurth, a forecaster with the National Weather Service.

"Humidity levels are dropping, and winds are picking up," Kurth said. "The main threat is overnight when the winds pick up in the mountains and foothills."

Some of the most destructive blazes in the state in the past two years were started by PG&E power lines. Winds can knock down live wires and power poles or drive trees and other vegetation into contact with them.

But the utility canceled plans to shut off power ahead of the deadly Nov. 8 blaze that started near Paradise.

An investigation by Cal Fire said transmission lines owned and operated by the utility started the fire that wiped out nearly 15,000 homes.

California regulators in May approved allowing utilities to cut off electricity to avoid catastrophic wildfires but said utilities must do a better job ramping up preventive efforts and educating and notifying the public, particularly people with disabilities and others who are vulnerable.

In January, PG&E sought bankruptcy protection, saying it could not afford an estimated $30 billion in potential damages from lawsuits stemming from catastrophic wildfires.

Earlier this month, PG&E agreed to pay $11 billion to insurance companies holding 85% of the claims from fires that include the Paradise blaze.

The settlement, confirmed Monday, is subject to bankruptcy court approval.

It's important for PG&E to pull itself from bankruptcy protection because it will be a big part of a wildfire fund set up to help California's major utilities pay future claims as climate change makes wildfires more frequent and severe.