Va. Project Would Be Largest Offshore Wind Farm in US 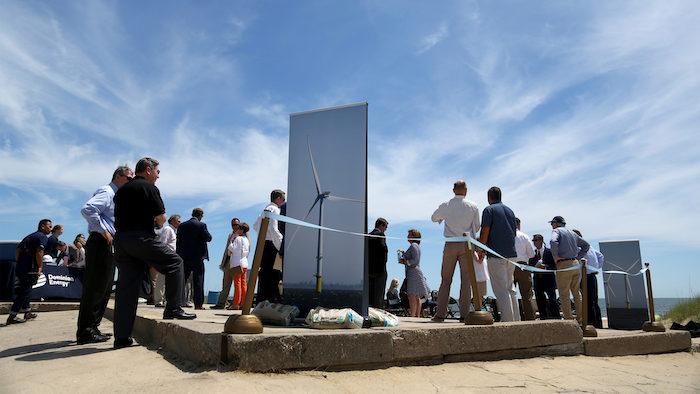 RICHMOND, Va. (AP) — Dominion Energy announced plans Thursday to seek approval to build what it says would be the largest offshore wind project in the United States off the Virginia coast.

The company told The Associated Press ahead of a public announcement that the project would include about 220 wind turbines in federal waters it has already leased 27 miles (43 kilometers) off Virginia Beach.

If approved as proposed, Dominion says, the approximately $7.8 billion project could produce more than 2,600 megawatts of energy during peak wind by 2026, enough to power 650,000 homes.

"This is, to us, big news. It's a big step for us to accomplish our carbon reduction goals," Mark Mitchell, vice president of generation construction for Richmond-based Dominion, said in an interview.

The project has been years in the making. Dominion already has an offshore wind pilot project underway, which state regulators approved last year despite their concerns about its cost.

Woll, who said the Sierra Club has been advocating for offshore wind in Virginia for a decade, called the announcement exciting not only for its clean energy potential but also for job generation.

Virginia Gov. Ralph Northam pledged his support for the project while speaking at an offshore wind conference in Norfolk.

"I've heard concerns about regulatory resistance. I commit that the Commonwealth will have the necessary legislative and public policy support for realizing our full potential in offshore wind. And we want to get there sooner than later," he said, according to prepared remarks provided by his office.

Dominion envisions beginning ocean survey work on the commercial-scale project in 2020, submitting a construction and operation plan in 2022 and starting the first phase of generation in 2024, with 880 megawatts coming online. Additional phases would come online in 2025 and 2026.

Each of those three phases is expected to cost about $2.6 billion, Mitchell said, though he emphasized that's an early estimate the company expects to drop as the offshore wind industry becomes better established in the United States.

A single five-turbine wind farm off Block Island, Rhode Island, opened in late 2016 and is the only operating offshore wind farm in the U.S., though other projects along the East Coast are in various stages of development. Mitchell said none would be as large as what Dominion is proposing.

Dominion officially started construction in July on the two-turbine, 12 megawatt pilot project. Though the turbines aren't expected to be installed until next summer, Mitchell said the project — the first to be installed in federal waters under the Bureau of Ocean Energy Management's process — had offered important insights that will apply to the commercial project.

"They were really important to learn exactly how to go about the process, the timing of the process, what the expectations were," Mitchell said.

A 2018 energy regulation overhaul that Dominion helped push into law makes it easier to get state approval for renewable energy projects like the offshore wind project. It also gave Dominion increased flexibility in accounting for costs and virtually guaranteed that it won't be ordered to give customers refunds or lower rates.

Mitchell said Dominion filed an application earlier this week with PJM, the regional transmission organization that coordinates the electrical grid in all or parts of 13 states and the District of Columbia. The project is also subject to approval from the Bureau of Ocean Energy Management and State Corporation Commission.

The announcement from Dominion came after Northam signed an executive order earlier in the week setting a voluntary goal that the state produce 100% of its electricity from carbon-free sources by 2050.

Dominion had previously committed to reducing carbon emissions 80% by 2050.

"We're excited that the governor has issued this executive order challenging us to do more, and we're up for that challenge," Mitchell said.

As a regulated monopoly, Dominion's customers pay for approved capital spending, and Dominion would be guaranteed a profit for reasonable and prudent spending related to the wind farm if it's approved.

"We believe Virginia can become a hub for offshore wind development across the eastern seaboard, but whenever a project is paid for by Virginians, it is imperative — regardless of fuel source — that we carefully scrutinize the project to ensure that unnecessary costs are not imposed in our transition to zero-carbon electricity," Will Cleveland, a senior attorney for the Southern Environmental Law Center, said in a statement.