Longmont voters approved the ban in 2012, but the state Supreme Court overturned it four years later. 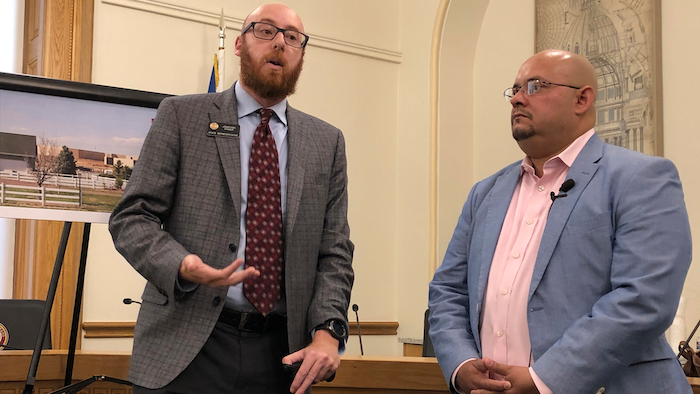 DENVER (AP) — Environmental activists asked a Colorado court on Wednesday to reinstate the city of Longmont's ban on hydraulic fracturing, arguing the ban is legal under a new state law giving local governments more authority over the oil and gas industry.

Longmont voters approved the ban in 2012, but the state Supreme Court overturned it four years later, saying only the state could regulate the industry under laws in force at the time.

Groups called Colorado Rising and Our Longmont said Wednesday that changed when the Legislature passed a law this year reversing the state's priority from encouraging oil and gas production to protecting public health and the environment.

The law, known as Senate Bill 181, also lets local governments impose some health and environmental rules as well as limit the location of new wells.

"There's nothing in Senate Bill 181 that says it prohibits local governments from banning oil and gas activity within their borders," said Joe Salazar, director of Colorado Rising. He spoke at a news conference to announce the action.

Hydraulic fracturing is standard practice in oil and gas drilling in area around Longmont, so banning the technique would effectively ban most drilling in the city.

Colorado Rising and Our Longmont filed a motion in District Court seeking to reopen the case that led the courts to overturn Longmont's ban.

The Colorado Oil and Gas Association released a written statement saying the ban was still illegal, citing comments by Democratic Gov. Jared Polis and some lawmakers who insisted the new law did not allow local governments to block oil and gas drilling.

Salazar acknowledged the courts could ultimately rule that an outright ban was illegal, but he voiced doubt that would happen.

"It is clearly and expressly stated by Senate Bill 181 that local governments can adopt stricter and more protective regulations over the oil and gas industry" than the state's rules, he said.

"I'd like to see them try to get around that expressed language," Salazar said, referring to the industry.

Democratic state Rep. Jonathan Singer of Longmont, who appeared at Wednesday's news conference, said the Legislature's intent with the new law was to "flip the script" on oil and gas regulation.

"The state does not take precedent over what local governments want to do when it comes to protecting our health and safety," he said.

Longmont city spokesman Rigo Leal said City Council members have not yet reviewed the court filing seeking to reinstate the ban and have not taken a position on it.

Leal noted that in 2018, the city signed agreements with two energy companies that essentially eliminated drilling in the city for a payment of $3 million.