Coastal Monitoring Associates is developing a pot that keeps ropes out of the water until the crabber is ready to pull it back up. 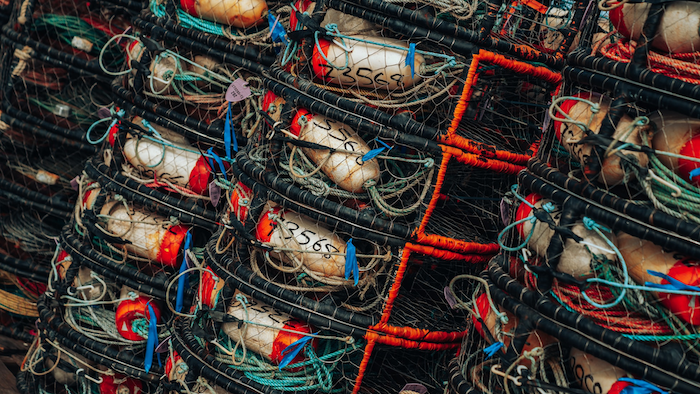 SALEM, Ore. (AP) — Oregon’s Dungeness crab season is coming up, but there’s a problem looming over this fishery.

The ropes and buoys that allow crabbers to collect their crab pots from the seafloor can injure and even kill whales when they swim into them.

Last year, 46 whale entanglements were reported off the West Coast, and crab gear was responsible for about a third of them.

According to Derek Orner, a bycatch reduction program coordinator with the National Marine Fisheries Service, this a growing problem in the spiny lobster and Dungeness crab fisheries.

“Were seeing increases in whale entanglements with a number of species that are listed under the National Marine Mammal Protection Act, in particular with humpback whales, gray whales, and blue whales,” he said.

Bart Chadwick, the company’s president, said when crabbers drop their pots in the ocean, the ropes and buoys can remain in the water column for days.

“The entanglement risk becomes high as you have hundreds of these traps in the water,” he said. “We feel like it’s just really important both for the environment and for the fishermen, finding a way to solve this problem in a way that allows people to keep fishing and do their jobs.”

His company is developing a crab pot that would keep the offending ropes out of the water column until the crabber is ready to pull the pot. The pot allows crabbers to set a timer for the release of the rope and buoy based on when they expect to be back to collect their catch.

The goal is to reduce the time the gear poses a risk to whales by 75%, Chadwick said.

Chadwick’s company has developed retrieval systems for other types of equipment, and he said the challenge, in this case, is keeping the cost down. Other ropeless technologies that have been developed cost thousands of dollars, he said.

“The advantage of this system is really that it can substantially reduce the risk without being so expensive as a lot of the systems that have been tried in the past,” Chadwick said. “What we’re trying to do is get the unit cost down into the range of a couple hundred dollars, which is in the range of fishing gear itself right now.”

The company received a federal grant for $119,746 to develop a prototype and work with fishermen to test it. Chadwick said the initial tests will be conducted in California, but then he plans to deploy some of the pots on boats in Oregon and Washington.

Orner said other projects his agency is funding are exploring geolocation and acoustic technologies, including a completely ropeless option that would use compressed air to send pots to the surface when the fishing boat arrives to collect them.

“We’re looking at a number of different approaches,” Orner said. “We’re looking for technologies that are cost-effective and easily usable by the fishermen. If we can reduce the amount of time that those lines are in the water, obviously, that’s going to reduce the entanglement possibilities.”