US Economy Grows Faster than Expected

But many economists believe growth is slowing sharply in the current quarter. 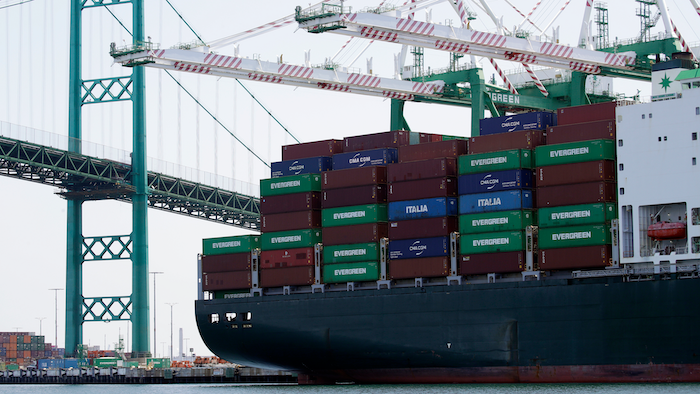 In this June 19, 2019, file photo, a cargo ship is docked at the Port of Los Angeles.
AP Photo/Marcio Jose Sanchez, File

WASHINGTON (AP) — The U.S. economy grew at a moderate 2.1% annual rate over the summer, slightly faster than first estimated, the government said Wednesday. But many economists say they think growth is slowing sharply in the current quarter.

The July-September growth rate in the gross domestic product, the economy’s total output of goods and services, exceeded the Commerce Department’s initial estimate of a 1.9% annual rate. A key reason is that businesses didn’t cut back on investment spending as much as first estimated.

The economy had begun the year with a sizzling 3.1% GDP rate, fueled largely by the now-faded effects of tax cuts and increased government spending. Many analysts have estimated that GDP growth is weakening in the current October-December quarter to a 1.4% annual rate or less. The most pessimistic forecasters foresee growth slowing to a sub-1% annual rate this quarter, largely because the U.S.-China trade war is causing businesses to reduce investment and inventories.

Still, the holiday shopping season is expected to be relatively healthy given solid job growth and consumer spending.

For the July-September quarter, consumer spending expanded at a solid 2.9% rate. That strength is expected to continue, with households enjoying rising incomes and nearly the lowest unemployment rate in a half century.

For the full year, economists think GDP will expand 2.3%, down sharply from a 2.9% GDP gain in 2018. That increase had been fueled by the $1.5 trillion tax cut that President Donald Trump pushed through Congress and billions in additional spending for the military and domestic programs.

For 2020 as a whole, many economists envision growth of around 2%. That would be roughly the annual average that has prevailed since the Great Recession ended in 2009. But it is well below the 3%-plus economic growth rates that Trump pledged to achieve with his program of tax cuts, deregulation and America-first trade policies.

As recently as several months ago, as U.S.-China trade tensions were escalating, global growth was slowing and financial markets were suffering losses, many analysts worried that the economy might be on the verge of recession.

But the Federal Reserve, which had raised rates four times in 2018, began cutting rates in July, giving a boost to interest-rate sensitive sectors of the economy. This month, after its third rate cut of the year, the Fed signaled that it would likely keep rates unchanged in coming months unless it saw signs of significant economic weakness.

That stance isn’t likely to please Trump, who has attacked Powell and his colleagues for raising rates last year and for being slow to cut them this year. Heading into the 2020 presidential election, Trump may keep up his Fed attacks, seeing the central bank as a convenient target if the economy starts to falter.

But the Fed is widely thought to have achieved its goal of a soft landing in which it’s slowed growth enough to keep the tightest job market in a half century from igniting inflation but not so much as to cause a downturn.

“We are in sort of a Goldilocks situation, with an economy that is not too hot or too cold,” said Sung Won Sohn, a professor of economics and finance at Loyola Marymount University. “We are sailing along at a nice pace, and we should enjoy it.”