Tesla Approved for Production in China

The company hopes its Shanghai Gigafactory will make 3,000 cars a week out of the gate and ramp up to 500,000 cars per year.

Last week, Tesla was approved to begin production in China.

The company is building a $2 billion Gigafactory, its first overseas manufacturing site, in Shanghai.

According to Reuters, Tesla was included on the country's approved automotive manufacturers list on Thursday, which means it can now begin production.

The Shanghai factory will not only serve the largest automotive market in the world, but it will also help the company avoid tariffs imposed on U.S. cars.

Tesla’s Q3 electric car sales improved this summer. According to the AP, the company delivered 97,000 vehicles from July through September, which was better than any other three-month period in its history.

The plant in Shanghai will be the first fully foreign-owned car plant on Chinese soil. 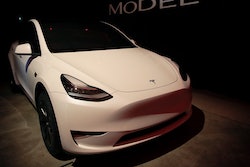