Many who lost their jobs transferred to other GM factories — so the workers have a presence at just about all of the automaker's plants. 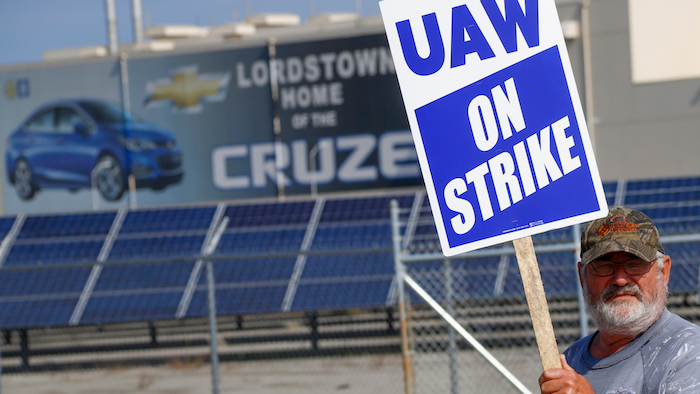 In this Sept. 16, 2019, file photo, a picketer carries sign at one of the gates outside the closed General Motors automobile assembly plant in Lordstown, Ohio.
AP Photo/Keith Srakocic, File

That's the message from workers at three shuttered General Motors factories that didn't get new products under the tentative contract agreement reached last week between GM and the United Auto Workers, who have been on strike against the company across the U.S. for over six weeks now.

About 2,000 employees who once worked at GM transmission plants near Baltimore and Detroit and a small-car assembly plant in Lordstown, Ohio, will repeat that message this week as 49,000 union members vote on the new four-year deal.

Approval could end the walkout that has crippled GM's production and cost the company an estimated $2 billion.

Most of the workers who lost their jobs at the three sites are scattered across the country after transferring to other GM factories, so they have a presence at just about all of the automaker's plants.

But few are holding out hope they can torpedo the contract, which comes with an $11,000 signing bonus, pay raises and plenty of other economic goodies for the factories that are staying open.

John Sandquist Jr., who spent 25 years building cars at Lordstown near Cleveland, said he is not optimistic he will change other people's minds, but he will vote against the pact.

"Your plant can be shut down at any time," Sandquist said. "What the contract is lacking is the language to prevent this from happening again."

Like many of the 1,400 workers who built the compact Chevrolet Cruze before GM stopped making the cars at Lordstown last March, Sandquist took a transfer. He wound up in Bowling Green, Kentucky, where after the strike ends he will make the new mid-engine Chevy Corvette.

He questioned why union leaders agreed to let GM close the factories, wondering if corruption inside the UAW influenced the decision to side with the company.

"We were the sacrificial lamb in this one for the whole of the UAW," Sandquist said. "And we got screwed."

In August, the FBI raided the suburban Detroit home of UAW President Gary Jones as part of a corruption probe. He has not been charged and has not commented on the raid. Earlier this month, Jones' successor as union regional director in Missouri was charged in a $600,000 embezzlement scheme.

Ten other people — including six current or former UAW officials — have pleaded guilty in the probe over the past two years. The latest guilty plea came Tuesday.

At a meeting of factory-level union leaders in Detroit last week, Dan Morgan, bargaining chairman for the local in Lordstown, made a plea to vote the contract down, saying they should stay on strike until GM keeps the plants open.

Union spokesman Brian Rothenberg said bargainers did the best they could, getting the company to agree to early retirement and buyout offers for workers from the closed factories who didn't move to other GM plants.

Kristin Dziczek, vice president of labor and manufacturing at the Center for Automotive Research, an industry think tank, said she doesn't think there are enough workers from the closed plants to influence the others and get the deal voted down.

"This is like gerrymandering," she said. "They're spread throughout the system."

Also, she said, it will be difficult to overcome the economic benefits of the contract, which brings workers hired after 2007 up to the same pay as older workers in four years or less, gives temporary workers a path to becoming full time, gives workers lump-sum payments and lifts the $12,000 cap on profit-sharing checks.

So far, a large assembly plant in Spring Hill, Tennessee, narrowly voted down the contract. But locals in Toledo, Ohio, at GM's technical center in Warren, Michigan, and at a metal stamping facility in Saginaw, Michigan, voted overwhelmingly in favor.

Voting wraps up on Friday, with the final tally to be released that evening. As of Tuesday, the deal was winning by more than 1,000 votes.

At Spring Hill, which has a large number of people who transferred from Lordstown, the plant closings were among many reasons that workers gave for voting down the contract 51% to 49%, said Mike Herron, union bargaining chairman at the plant.

They were also unhappy with the provisions that make temporary employees full time after three years of continuous service, and they objected to a cap of 2,000 workers who would get early retirement packages, Herron said.

The GM contract will serve as a template for negotiations with Ford and Fiat Chrysler. The union will probably pick the next company once the GM contract is ratified.

Under the deal, GM agreed to invest about $7.7 billion in its factories, creating or keeping 9,000 jobs. It also extended a moratorium on outsourcing work, but it doesn't apply to GM joint ventures with other companies.

Of the $7.7 billion, $3 billion will go to GM's Detroit Hamtramck plant, which will make several high-end battery-powered pickup trucks and SUVs. One under consideration is a Hummer.

A total of $1.5 billion will go to a factory in Wentzville, Missouri, to make pickups. A factory near Lansing, Michigan, will split $1 billion with the plant in Spring Hill, where the company will turn out SUVs. And $2 billion will go to refurbish other plants.

Critics complain the contract doesn't bring back any products from Mexico, which the union had sought.