A union administrator allegedly accrued nearly $2 million in “illicit benefits” over a decade.

As the Big Three continue discussions with the United Auto Workers union on terms for an upcoming contract, there’s a lot of distracting noise in the background — and it’s the roar of a raging scandal that just continues to grow.

The issue is an investigation by federal agencies alleging rampant fraud taking place by UAW officials who demanded kickbacks from automakers, as well as vendors supplying products and services to the union.

After a handful of indictments of union officials and implicated parties within Fiat Chrysler, we learned last week that a union administrator named Michael Grimes was party to GM’s unit of the UAW, meaning FCA won’t be the only one of the Big Three to get dragged into this whole ordeal.

But it’s the specifics of this particular scheme with Grimes that are equal parts astonishing and infuriating, especially for GM’s union workers. You see, Grimes, while representing a training center run jointly by the UAW and GM, is being accused of recommending a contractor to fulfill an order for 58,000 UAW watches to be given out to GM’s employees. Through this, Grimes reportedly muscled a $250,000 kickback from the contractor, while promising to recommend the vendor again for future orders … which he did.

Down the road, a $6 million order for custom “Team UAW-GM” jackets, along with another for 55,000 backpacks, pumped more cash into his personal coffers — to the tune of about $900,000 over the life of the scheme with this vendor.

But the worst part here is that, besides the egregious kickbacks, Automotive News is reporting that the watches were never even distributed, and that “the $4 million order remains packed away in a warehouse near the Detroit River.”

But maybe the GM workers didn’t want them. Why? Auto News says the watchmaker was actually a chiropractor who just jumped into the watch business, reportedly, to recoup a bad loan he had made to a friend of one of the union officials.

Overall, Grimes is accused of accruing nearly $2 million in “illicit benefits” over the course of a decade. 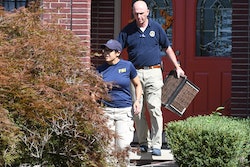