Uber feared it would face a cost disadvantage if another company started an autonomous ride-hailing service first. 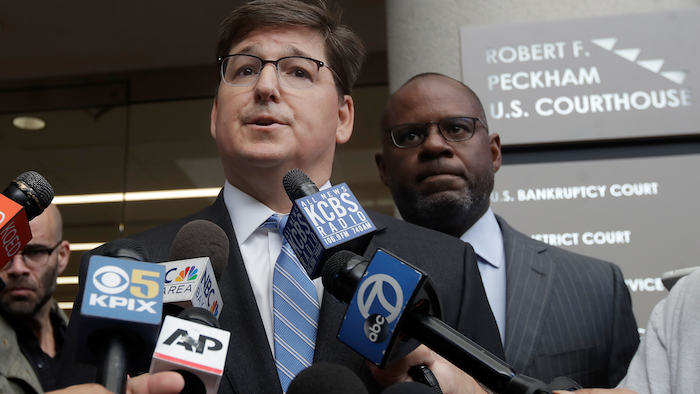 DETROIT (AP) — A self-driving vehicle pioneer who used to work for Google has been charged with stealing secrets from the company before he joined Uber's efforts to build robotic vehicles.

Anthony Levandowski was charged with 33 counts of trade secrets theft in an indictment filed Tuesday by the U.S. attorney's office in San Jose, California. The criminal case arose out of a lawsuit that Google self-driving spinoff Waymo filed against Uber alleging technology theft.

Here's how it wound up in the criminal courts:

Former Uber CEO and founder Travis Kalanick believed that the company could not survive without being the leader in autonomous vehicles. One of Uber's biggest expenses is to pay drivers for ferrying passengers, and that cost could be reduced or eliminated with vehicles that drive themselves. Uber feared it would face a cost disadvantage if another company started an autonomous ride-hailing service first.

That led Uber to start recruiting Levandowski in 2015. Levandowski soon left Google to help found Otto, a self-driving truck startup. Uber bought Otto for $680 million in 2016 and got both Levandowski and Otto's technology.

Google sued Uber accusing it of stealing autonomous vehicle secrets and alleging that Levandowski downloaded documents before he left the company. The theft allegedly included Google technology for laser sensors that give the cars the ability to see their surroundings.

Uber denied knowing about the documents, and Levandowski invoked his Fifth Amendment right against self-incrimination leading up to a trial. He was eventually fired by Uber.

How the civil case turned criminal

About a week after the trial began in early 2018, Uber agreed to settle the case and pay $245 million to Google's self-driving car spinoff, now called Waymo. The Google spinoff also got guarantees to prevent its technology from being used in Uber's autonomous cars.

But before that happened, U.S. District Judge William Alsup in San Francisco, who was overseeing the Waymo-Uber lawsuit, took the unusual step of referring the case to the U.S. attorney's office based on testimony and evidence unveiled ahead of a trial.

Yes, but it ran into serious trouble in March 2018 when one of its autonomous test vehicles, a Volvo SUV, killed a pedestrian on a darkened street in Tempe, Arizona. Elaine Herzberg, 49, was pushing a bicycle when the crash occurred. Investigators later determined that Uber's human backup driver was streaming the television show "The Voice" on her phone and was looking downward before the crash. Investigators concluded the crash could have been avoided had Vasquez not been distracted.

The National Transportation Safety Board released a preliminary report saying the autonomous driving system on Uber's SUV spotted Herzberg before hitting her, but didn't stop because the system used to automatically apply brakes in potentially dangerous situations had been disabled "to reduce the potential for erratic vehicle behavior."

Uber suspended its autonomous vehicle testing on public roads after the crash, and it was also put on hold by Arizona's governor. Uber resumed testing autonomous vehicles in Pittsburgh in December 2018 after getting clearance from Pennsylvania officials. The cars run autonomously but have two human safety operators called "mission specialists" in the front seat. Uber also is gathering data with human drivers in control in San Francisco and Toronto.

What happens now in the criminal case?

Charges will proceed against Levandowski, who faces up to 10 years in prison and $250,000 in fines per criminal count. Prosecutors say the probe is ongoing, but they wouldn't say whether Uber and Kalanick are targets. Prosecutors say Google and Uber cooperated in the probe.

Levandowski's lawyers maintain his innocence, calling the criminal charges a rehash of civil claims that have been settled.