Ascend Elements plans to invest close to $1 billion in the 140-acre campus and 500,000-square-foot manufacturing facility.

"Today, we've begun building something that doesn't exist anywhere in the United States – a domestic source of sustainable lithium-ion cathode material for EV batteries," said Michael O'Kronley, CEO of Ascend Elements. "We're in the middle of a global energy transformation and it's critical that we produce lithium-ion battery material in the United States. Our future energy independence and national security depend on it."

"Ascend Elements' initial announcement made history as the largest development project in Christian County, but with recent announcements the investment has grown to nearly $1 billion and will create 400 full-time jobs, making it the single largest investment in Western Kentucky," Governor Andy Beshear said. "Kentucky has quickly become a national leader in the electric-vehicle space and a substantial supplier network that consists of innovative companies like Ascend Elements is the reason for that success. I want to thank the leaders at the company for this commitment to the commonwealth and I can't wait to see Ascend Elements and the Hopkinsville community grow together."

Ascend Elements plans to invest close to $1 billion in the 140-acre campus and 500,000-square-foot manufacturing facility. The first-of-its-kind facility will be home to the company's innovative Hydro-to-Cathode™ direct precursor synthesis process technology — the most efficient and economically compelling way to return recycled battery materials to the battery supply chain. This closed-loop system generates minimal waste and carbon emissions compared to traditional cathode manufacturing. With potential expansion phases, the facility will employ up to 400 people and generate up to $4.4 billion in economic impact to Kentucky over the construction period and first 10 years. 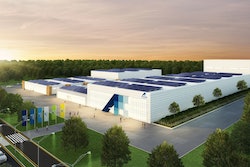 Ascend Elements to Build $1B EV Battery Plant in Kentucky