The F-35 program is the U.S. military’s most expensive weapons system of all time. 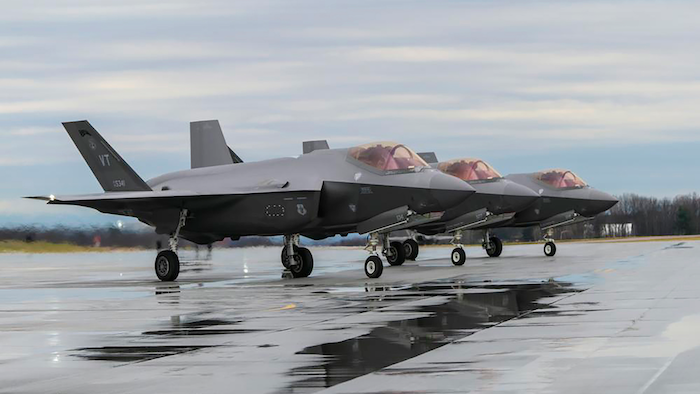 F-35 Lightning II Aircraft assigned to the 158th Fighter Wing, Burlington Air National Guard Base, prepare for takeoff, April 13, 2022, in Burlington, Vt. The first overseas deployment of the Vermont Air National Guard's F-35 fighter jets will have the pilots and their aircraft patrolling the skies of Europe during one of the most tense periods in recent history. More than 200 Vermont air guard personnel, their equipment and eight F-35s are now in Europe.
Staff Sgt. Cameron Lewis/U.S. Air National Guard via AP

SOUTH BURLINGTON, Vt. (AP) — The first overseas deployment of the Vermont Air National Guard’s F-35 fighter jets will have the pilots and their aircraft patrolling the skies of Europe during one of the most tense periods in recent history.

More than 200 Vermont air guard personnel, their equipment and eight F-35s are now in Europe, where the pilots will fly what are called enhanced air policing missions along NATO’s eastern flank to monitor the area for intrusions by Russian aircraft.

The deployment marks the first time the Vermont Air National Guard, the first guard unit in the country to fly the F-35s, has deployed overseas with the Air Force’s newest airplane.

The deployment comes only months after the Vermont guard had completed its conversion from the F-16 fighter planes they used to fly to the F-35s, which began arriving in Vermont in September 2019.

“We’re there to defend NATO,” said F-35 pilot Lt. Col John “Rocky” MacRae, a squadron commander within the Vermont Guard’s 158th Fighter Wing. “We’re not there to to be aggressive or start anything. We’re there to posture in defense of NATO and support our allies.”

The F-35s from Hill Air Force Base and the Vermont National Guard are among a small but growing number of F-35 units ready for combat after years of efforts.

NATO, the military alliance of 30 countries from Europe, the United States and Canada, was created in the aftermath of World War II to counter the military threat from the former Soviet Union. The Russian invasion of Ukraine has highlighted the modern importance of the alliance.

NATO says the enhanced air policing mission is part of a broader series of measures introduced after Russia's 2014 annexation of the Crimean peninsula from Ukraine. It involves a continuous presence of fighter aircraft and crews who are ready to react to possible airspace violations.

On April 29, NATO reported jets scrambled in the preceding days to track and intercept Russian aircraft in the Baltic and Black sea regions. The Russian aircraft, which often do not transmit a radio code indicating their position and altitude, do not file flight plans, nor do they communicate with air traffic controllers, NATO says.

The alliance said that the Russian aircraft never entered NATO airspace and that “the interceptions were conducted in a safe and routine manner.”

The Vermont aircraft now in Europe are replacing F-35s from Hill Air Force Base in Utah, which arrived in Europe in February, just before the Russian invasion of Ukraine.

Retired Maj. Gen. Donald Shepperd, a former head of the Air National Guard, said that there is always a learning curve on a unit's first deployment with a new aircraft but that he felt the Vermont unit would adapt as needed.

“They’re very capable of doing anything," said Shepperd. “And they’re also in the best airplane, the best fighter that the United States Air Force has. That's a real first for them to fly it, the first to deploy it and the first operational deployment."'

Shepperd said it highlights how the role of the Air National Guard has evolved over the years from a time when guard units received old equipment to where it is now, playing a regular role in Air Force deployments with the newest equipment available.

The Air Force describes the F-35 as its fifth-generation fighter that combines stealth technology with the ability to carry out multiple missions. Different models are being built for the Air Force, Navy and Marines, and the jets are being sold to U.S. allies across the world.

The F-35 program is also the U.S. military’s most expensive weapons system of all time, with an estimated total cost of $1.5 trillion over the expected half-century life of the program. The model of planes based in Vermont cost about $94 million each.

The Air Force is in the process of equipping more of its units with F-35s both in the active duty Air Force and the Air National Guard. Vermont was the first Air Guard unit to receive the planes.

The Vermont guard began sending its personnel to Europe last week to take part in the air policing mission. Eight Vermont F-35s arrived Monday at Spangdahlem Air Base, Germany, after making the trans-Atlantic flight from their base at the Burlington International Airport.

Vermont guard officials won't say where their planes will be patrolling in Europe. But the fighters from Utah operated from Estonia’s Amari Air Base, Lithuania’s Siauliai Air Base, along the Baltic Sea, and Romania’s Fetesti Air Base near the Black Sea, the Air Force says.

MacRae, the Vermont F-35 pilot and a combat veteran of flying in Iraq and Syria making his seventh deployment downplayed how pilots could feel flying such missions when the tension between NATO and the Russians are at one of the highest points in recent memory. He said they are trained for any eventuality.

But Shepperd, a combat veteran of Vietnam, said that he was sure the Vermont pilots and other personnel know how important the mission is and that they will be briefed on the conditions. The pilots know they are not supposed to do anything provocative.

“Everybody knows we are able to defend ourselves if anything bad happens," Shepperd said. “But you don’t want to be the guy that causes World War III."