California Plan Aims to Triple Sales of Electric Cars by 2026

The proposal would slowly raise the sale of new cars that are electric, hydrogen-powered or plug-in hybrids to 100% by 2035. 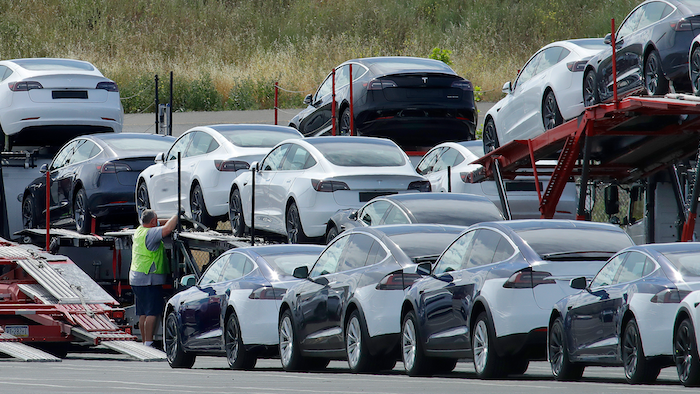 In this May 13, 2020, file photo, Tesla cars are loaded onto carriers at the Tesla electric car plant in Fremont, Calif. California wants electric vehicle sales to triple in the next four years to 35% of all new car purchases. Regulations passed Tuesday, April 12, 2022 by the California Air Resources Board set a roadmap for the state to achieve California Gov. Gavin Newsom's ambitious goal of phasing out the sale of new gas powered cars. The draft must go through a months-long state regulatory process and get approval from the U.S. EPA.
AP Photo/Ben Margot, File

SACRAMENTO, Calif. (AP) — California wants electric vehicle sales to triple in the next four years to 35% of all new car purchases, an aggressive target set as part of the goal to phase out the sale of gas-powered cars by the middle of next decade.

The proposal released Tuesday by the California Air Resources Board would slowly raise the sale of new cars that are electric, hydrogen-powered or plug-in hybrids to 100% by 2035. About 11% of all new passenger car sales nationally happen in California, giving the state significant influence over the auto market. Californians would still be allowed to drive gas-powered cars and sell used ones, meaning planet-warming emissions will still spew from the state's roadways.

The release kicks off a months-long state review process and the plan requires approval from the U.S. Environmental Protection Agency. The state is unlikely to face resistance from a Democratic White House. The Biden administration recently restored California's power to set its own vehicle emissions standards under the Clean Air Act and the president has committed $5 billion to build more charging stations around the country.

Emissions spewed from gas-powered passenger vehicles make up about a quarter of the state's total greenhouse gas emissions — more than any other single source, according to the state air board. California has established some of the nation's most aggressive climate policies and is the first state in the country that's created a roadmap for transitioning to zero-emission vehicles. Washington Gov. Jay Inslee signed a law last month setting a goal of requiring all new vehicles in the state to be electric by 2030, but regulators have until the end of 2023 to say how the state will get there.

California's rules would require 35% of new car sales for model year 2026 to be zero-emission vehicles, including battery or hydrogen powered, or plug-in electric hybrids. That's a sharp increase from 2021, when about 12% of all cars sold in the state were zero-emission, according to the air board.

That requirement ramps up to 100% of all new sales by 2035. New gas-powered cars wouldn't be completely banned; up to 20% of sales by 2035 could be plug-in hybrids that run on a combination of battery and gas power, though the regulations boost how far such cars must be able to travel on battery power alone.

Beyond reducing greenhouse gas emissions that contribute to climate change, a transition to electric cars would reduce air pollution like ozone and fine particulate matter that's especially bad in southern and central parts of the state.

Major automakers including Ford and Toyota deferred to the Alliance for Automotive Innovation, an industry group, for a statement on the proposal. The group says the industry is “committed to electrification and a net-zero carbon transportation future" but raised questions about the drastic ramp up in the required zero-emission vehicle sales.

“Automakers will certainly work to meet whatever standards are eventually adopted, but these draft requirements will be extremely challenging even in California and may not be achievable in all the states that currently follow California’s program," the group said.

Nine states follow California's current zero-emission vehicle rules, which set sales and other requirements through model year 2025. Five other states are set to start following California's rules for future model years. If the federal government approves California's new plan, the other states would have to decide whether to follow suit. New York also aims to phase out gas powered vehicles by 2035.

The regulations require electric vehicles to get at least 150 miles (241 kilometers) per charge, up from 50 miles (80 kilometers), though most manufacturers exceed that. They also establish an eight-year or 100,000-mile (161,000-kilometer) battery warranty.

Every carmaker that sells in California — currently 17 — would be required to hit the 35% sales mark. But car sales can be unpredictable and the rules have wiggle room. California's existing electric vehicle standards let companies save credits if they sell a higher percentage of electric cars than required, and those credits can be used later to meet sales goals.

Companies can also make deals with each other to count each other’s sales as their own. Electric-vehicle maker Tesla has made such deals with many automakers in the past, state officials said.