The all-solid-state battery will replace the lithium-ion battery now in use for a 2028 product launch and a pilot plant launch in 2024. 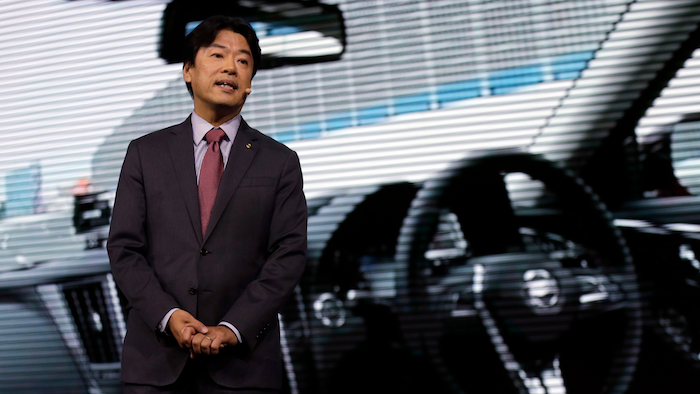 Nissan Motor Co. Executive Vice President Kunio Nakaguro speaks during Nissan's presentation of the media preview of the Tokyo Motor Show on Oct. 23, 2019, in Tokyo. Nissan is working with NASA on a new type of battery for electric vehicles that promises to charge quicker and be lighter yet safe, the Japanese automaker said Friday, April 8, 2022. Nakaguro said Nissan was extremely competitive in the game because the battery it’s developing promised to be “a game-changer.”
AP Photo/Kiichiro Sato, File

TOKYO (AP) — Nissan is working with NASA on a new type of battery for electric vehicles that promises to charge quicker and be lighter yet safe, the Japanese automaker said Friday.

The all-solid-state battery will replace the lithium-ion battery now in use for a 2028 product launch and a pilot plant launch in 2024, according to Nissan.

The all-solid-state battery is stable enough to be used in pacemakers. When finished, it will be about half the size of the current battery and fully charge in 15 minutes, instead of a few hours.

The collaboration with the U.S. space program, as well as the University of California San Diego, involves the testing of various materials, Corporate Vice President Kazuhiro Doi told reporters.

“Both NASA and Nissan need the same kind of battery,” he said.

Nissan and NASA are using what’s called the “original material informatics platform,” a computerized database, to test various combinations to see what works best among hundreds of thousands of materials, Doi said.

The goal is to avoid the use of expensive materials like rare metals, which are needed for lithium-ion batteries.

Nissan is also counting on its historical experience with the Leaf electric car, which first hit the market in 2010 and has sold more than half a million units globally, although the battery technology is different, Doi and other company officials said.

The Leaf battery has not had any major accidents on roads, and some parts of the technology remain common, such as the lamination of the battery cell, they said.

Other automakers, including Japanese rival Toyota Motor Corp., as well as Volkswagen of Germany and U.S. automakers Ford Motor Co. and General Motors Co., are working on all-solid-state batteries.

But Nissan Executive Vice President Kunio Nakaguro said Nissan is extremely competitive and that the battery it is developing promises to be “a game-changer.”

Interest in electric vehicles is growing because of concerns about the use of fossil fuels contributing to climate change and pollution. Players in the EV sector, such as Tesla and Waymo, are also growing and there is increased competition.

Nissan Motor Co., based in Yokohama, has been eager to put behind it the scandal of its former superstar executive Carlos Ghosn. He was arrested in 2018 on various financial misconduct charges in Japan, but jumped bail in late 2019 and now lives in Lebanon, a nation of his ancestry that has no extradition treaty with Japan. He says he is innocent.

Ghosn, who led Nissan for two decades, spearheaded the electric vehicle drive at the company, which also makes the March subcompact and Infiniti luxury models.