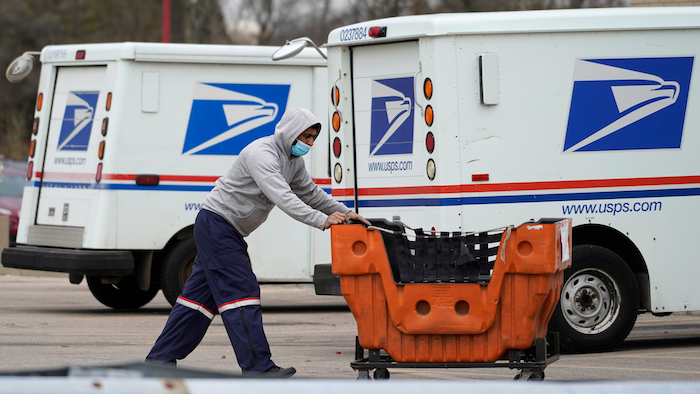 WASHINGTON (AP) — The U.S. Postal Service relied on false assumptions as it evaluated purchases of a new generation of delivery vehicles, a government watchdog said Tuesday.

Jill Naamane of the Government Accountability Office told a House hearing that a Postal Service analysis used to justify a mix of gas and electric vehicles overstated maintenance costs of electric vehicles and relied on gas prices that don't reflect current price spikes.

While the Postal Service estimated in 2020 that gas would cost $2.21 to $2.36 per gallon, the national average in March was $4.24 per gallon, according to the AAA Gas Prices website.

Naamane's testimony came as the House Committee on Oversight and Reform looked into a Postal Service contract to replace its huge fleet of mail-delivery trucks with a mix of gas and electric vehicles. The Environmental Protection Agency and Democratic lawmakers have said the plan has too few electric vehicles and falls short of President Joe Biden’s goals to address climate change.

The Postal Service’s fleet includes 190,000 local delivery vehicles. More than 141,000 of those are models that went into service between 1987 and 1994 and lack safety features like air bags, anti-lock brakes and backup cameras.

The contract allows the Postal Service to increase the number of electric vehicles purchased, but she noted that the independent agency remains in “crisis condition."

Oversight Committee Chairwoman Carolyn Maloney, D-N.Y, is among those advocating for more electric-powered vehicles, saying they're cheaper over the long haul in addition to reducing greenhouse gases.

“Electric vehicles are the vehicles of the future. To continue purchasing gas-guzzling vehicles is not only bad for the environment — it’s bad for the Postal Service and bad for its customers,” Maloney said.

Rep. James Comer of Kentucky, the panel's top Republican, said Democrats pushing the Postal Service to buy at least 75% electric vehicles want the agency to be “a guinea pig for their radical Green New Deal agenda.”

During the hearing, some Republicans expressed concern about China's grip on rare earth minerals and battery production, suggesting China would benefit from greater EV purchases.