The company lowered its annual sales forecast to about 4 million vehicles. 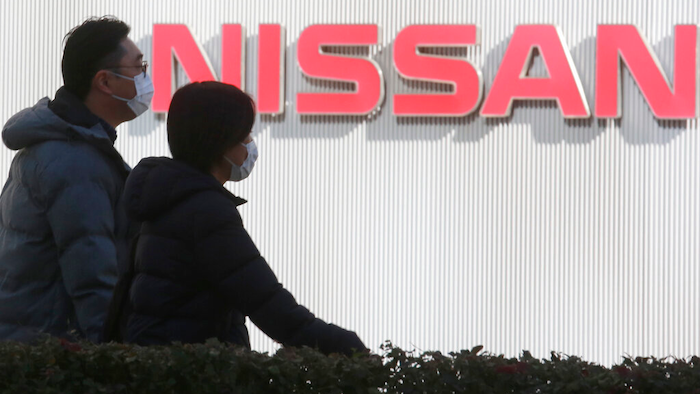 TOKYO (AP) — Japanese automaker Nissan reported Tuesday losses for the fiscal third quarter, as its sales were hit by the coronavirus pandemic and its brand image continued to take a beating from the financial misconduct scandal centered on its former chairman, Carlos Ghosn.

Nissan’s sales have been recovering from the hit they took earlier this year, when the pandemic slammed supply and demand.

New models are in the pipeline, and attractive products will ensure better profitability, he said.

“Our new models are going to bring about a global sales recovery,” said Uchida.

Nissan is a co-defendant in a trial over financial misconduct allegations centered on under-reporting of Ghosn's compensation. It acknowledged guilt in the case and was fined. Ghosn has fled Japan, jumping bail, while another former executive, Greg Kelly, an American, is on trial in Tokyo. Like Ghosn, he says he is innocent.

Ghosn is in Lebanon, which has no extradition treaty with Japan.

Kitamura repeatedly asked Nada about Nada’s involvement in discussions on Ghosn’s compensation, apparently seeking to show that Kelly had little say in determining the compensation and was trying to figure out legal solutions.

“Do you not believe Mr. Kelly thought this would all be a plus for Nissan?” Kitamura asked of Kelly’s efforts.

The testimony from Nada and other officials at the Tokyo District Court have detailed the options Nissan considered for compensating Ghosn after he took a pay cut in 2010 of about 1 billion yen ($10 million) a year, or half of what he had been getting. The amount Ghosn was paid became a big issue for the company after Japan began requiring disclosure of big salaries.

None had been acted upon when Ghosn was arrested in November 2018.

Before his arrest in late 2018, Ghosn was revered for having turned Nissan around from near bankruptcy after its French alliance partner Renault sent him to Japan in 1999.

High-ranking people at Nissan, including Ghosn, were convinced his pay would come under criticism, according to testimony from several Nissan officials.

Japanese prosecutors have argued the convoluted efforts to pay Ghosn without disclosing the full amount constitute a white-collar crime.

Testimony and documents shown in court have highlighted that others at Nissan also knew about the efforts to covertly pay Ghosn, including accountants and Nissan's former Chief Executive Hiroto Saikawa.

A verdict is not expected until later this year and will come from a panel of three judges. Less than 1% of criminal trials in Japan end in acquittals.