Officials say the project will make the state a leader in electric transportation. 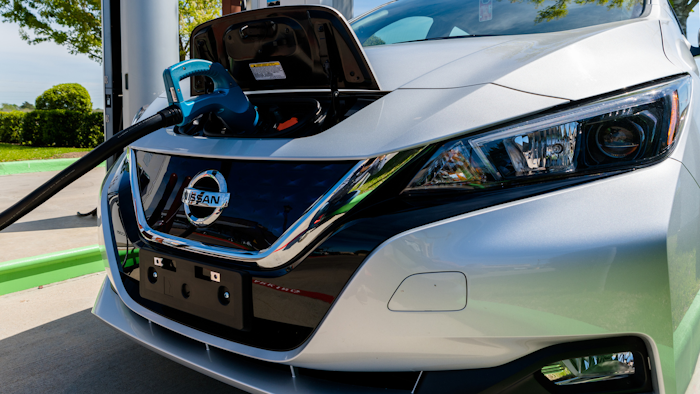 NASHVILLE, Tenn. (AP) — The nation's largest public utility is working with Tennessee to develop a statewide system of public electric vehicle charging stations that officials say will make the state a leader in electric transportation.

Tennessee already ranks third in the nation for electric vehicle production, with Nissan building the all-electric Leaf at its Smyrna plant since 2013, Tennessee Valley Authority President and CEO Jeff Lyash said in a virtual news conference Wednesday. In addition, General Motors announced in October that it will spend $2 billion to convert the Spring Hill plant into its third U.S. site to build electric vehicles. And Volkswagen has said it will begin building the electric ID.4 in Chattanooga toward the end of next year.

The TVA and the consortium Drive Electric Tennessee have a goal of 200,000 electric vehicles in Tennessee by 2028. That's an ambitious plan as current electric vehicle ownership in the state is about 11,000, according to the TVA.

Studies have shown one of the barriers to purchasing an electric car is range anxiety, or the fear that a vehicle will run out of charge and the driver will become stranded, Lyash said. The network of charging stations aims to give drivers confidence that they can get anywhere in the state without having to worry.

The TVA estimates that 200,000 electric vehicles would have a $120 million economic benefit per year in Tennessee by reducing reliance on imported fuels in favor of electric power generated in the Tennessee Valley. The federal public utility estimates consumers would save about $200 million per year on fuel costs, and the entire state would benefit from cleaner air. Carbon emissions would be reduced by nearly 1 million metric tons per year.

The charging network is expected to include about 50 stations, primarily along interstates and U.S. and state highways. The idea is to have chargers available at least every 50 miles (80 kilometers), “from the mountains of East Tennessee to the banks of the Mississippi,” Lyash said. It is expected to cost about $20 million and should be built out over the next three to five years.

Tennessee Department of Environment and Conservation Commissioner David Salyers said on Wednesday that the agency is committing $5 million toward the project from the Volkswagen diesel emissions scandal settlement. The TVA is committed to raising the remaining $15 million. Lyash said they expect local utilities to own and operate the initial charging stations. Ultimately, as more electric cars are on the road, they expect to see more private investment in the charging infrastructure.

Salyers said they are also looking at the state parks as possible locations for charging stations, a move that could help spur tourism.

Tennessee Department of Transportation Commissioner Clay Bright, who was also on the video conference, said it is important to take advantage of federal incentives for electric transportation, including $7 million currently available for the charging effort. By making wise use of available funds, Tennessee can be a national leader in the move toward electric vehicles, he said.

“Otherwise, we're going to be behind,” Bright said.

Tennessee's network will serve as a model that the TVA can expand to the rest of its seven-state region, where it provides power to nearly 10 million people, Lyash said.