The Boring Co. wants to widen the scope of its underground motorway. 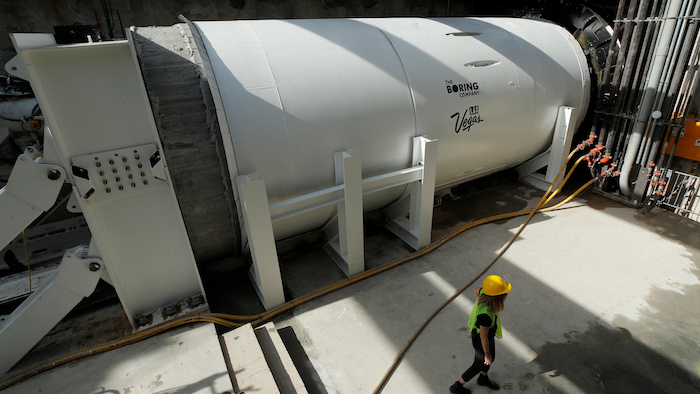 A tunnel boring machine at the bottom of a construction site at the Las Vegas Convention Center, Nov. 15, 2019.
AP Photo/John Locher, File

LAS VEGAS (AP) — A company nearing completion of a short underground motorway for electric cars at the expanded Las Vegas Convention Center wants to widen its scope and build a people mover tunnel system beneath the Las Vegas Strip.

It would drill underground from downtown Las Vegas, beneath the Las Vegas Boulevard resort corridor to the newly opened Allegiant Stadium, a distance of about 7 miles (11.25 kilometers), according to a presentation Tuesday to the Las Vegas Convention and Visitors Authority.

A connection to McCarran International Airport is also being considered, the Las Vegas Review-Journal reported.

No cost projections were disclosed by authority CEO Steve Hill and Boring Co. President Steve Davis. But they said taxpayer dollars would not be used and passenger stations would be paid for by property owners.

They said the company is seeking a city permit and will submit plans to Clark County.

The concept includes a loop of about 15 miles (24.15 kilometers), with perhaps 50 stations where passengers would board self-driving electric Tesla vehicles. Passenger fares have not yet been determined.

Boring Co. has spent about a year drilling the $52.5 million Convention Center people mover, which has three stations along parallel 1-mile (1.6 kilometer) tunnels connecting exhibit halls and parking at the sprawling conference facility just east of the Strip.

It is expected to open by the end of the year to provide trips of less than two minutes for conventioneers in 16-passenger Tesla vehicles. The convention authority plans to make trips free.

Davis and Hill have in the past floated the idea of a wider transit system similar to the Convention Center project that would be built and operated as a commercial venture by Boring, the Review-Journal reported. The system would function as an underground ride-hailing system with passengers taken point-to-point to destinations, instead of a subway system with station stops.